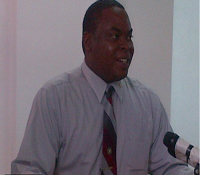 This was the main objective of a workshop which was held at the Prevost Cinemall on Thursday.

Director of Primary Health Care Dr. Martin Christmas in his address at the official opening spoke of the critical health issues of concern for officials of the World Health Organization.

He spoke to issues such as, radiation emergencies, food safety and chemical events as well as zonosis (diseases transmitted from animals to humans) which has heightened the need for such discussions.

He said, “The recent H1N1 crisis of 2009 to which over one million deaths were attributed, raised the profile of risk communication to new heights.  It showed that decisive national and international action and taking full advantage of modern communication tools could prevent disease and by extension health incidents.”

He added however, that “Our experience in Dominica with this disease demonstrated the value of effective and transparent dialogue among those responsible for assessing, minimizing and regulating risk and those who may be affected by the outcomes of those risks.  Despite our economic situation in comparison to countries such as the US, Dominica experienced no death among the more than one million worldwide affected by the outbreak. “

He said, “The H1N1 crisis also illustrated that communication with the public stakeholders within the health systems, schools and numerous others during a public health emergency is critical to managing any event of public health significance.”

The goal of the risk communication plan is to ensure the timely flow of information during all phases of health care crisis.

Dr. Christmas emphasized that an effective system must not only be installed well in advance but must be well-known by health care stakeholders.

“Identification of objectives, target audiences, key messages and communication channels and action plans must be collaboratively done. The plan belongs to all the key stakeholders of the event and crisis or hazard at hand and should be loaned by all,” he stated.

He added, “When a crisis such as an outbreak or pandemic emerges, communication goals shift to focus on containment activities ensuring that the public in part via the media is provided the right messages, supports recommendations and that all the identified personnel  are informed and prepared and also ready to act.”

According to the health official,”....failure to work with and properly inform the public results in the loss of public confidence and threatens the ability of not only the health sector but economies and the Government as a whole.  The health sector has recognized that as part of maintaining trust, we must inform the public quickly of developments include various sectors in planning, listen and react quickly to stakeholders to address rumors and diminish social turbulence.”

We have 225 guests and no members online