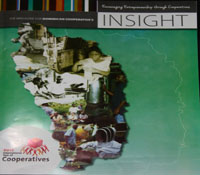 The magazine was launched as part of local activities in observance of the United Nations International Year of Cooperatives.

Dominica’s Social services Minister Hon. Gloria Shillingford during the formal launch of the magazine said the magazine is informative and will be instructive to people with an interest in becoming involved in Cooperatives.

“It provides valuable information on the importance and purpose of cooperatives and the procedures for establishment, management and registration of cooperatives. In addition it gives insight into the different types of cooperatives”.

On December 18 2010, The United Nations General Assembly declared 2012 as the International Year of Cooperatives, highlighting the contribution of cooperatives to socio-economic development.

The aim is to Increase public awareness about cooperatives, how they benefit their members and contribute to socioeconomic development and the achievement of Millennium Development Goals; also to promote awareness of the global network of cooperatives and their efforts in community building, democracy and peace.

The cooperative sector in Dominica has about 57,000 members in about 39 cooperatives and is estimated to account for over 1,000 jobs around the island.