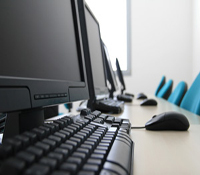 The Government of Dominica is delivering on its promise to establish ICT facilities in rural communities for the development of the Information and Communication Technology (ICT) Sector on the island.

In an interview with GIS news on March 12 2013, Honourable Kelvar Darroux, Parliamentary Secretary in the Prime Minister’s office responsible for Information Technology, announced Government’s intentions to embark on a project to implement Tele-Centres in several rural communities.

Last week at the National ICT Fest press launching, the Minister informed that Government is indeed following up on that venture, and the plan has been approved by the Cabinet.

“We have already approved for the implementation of one such center in the community of Bioche.  The Government of Dominica will provide all of the equipment as well as pay the rent for the facility that will be used to house that center,” Honourable Darroux confirmed.

As previously indicated by Honourable Darroux earlier this year, rural communities are being targeted because of their general lack of computer resource centres to facilitate student research.

During his announcement in March, the Minister expressed his optimism about the undertaking.

“Hopefully if all goes well we will see several other communities benefitting from this project and ensuring that ICT in the various communities across this island can be of a very high standard.”

He indicated that rural communities such as Belles, Penville where there are no ICT centers available will also be explored for the installation of such centers. “Persons in these various communities will be able to have access to internet at their free will,” he affirmed.

At the ICT Fest press launch this week, Honourable Darroux stated that with support from the AID Bank and Invest Dominica Authority, Government intends to take steps to promote the country as a knowledge-friendly area where persons can be successfully employed in the field of ICT.

“We all know the impact that Clear Harbour has on this country.  Although sometimes it may be a challenge but Government remains committed to ensuring that we work with these companies. Through Invest Dominica and the Aid Bank, we can put the necessary infrastructure in place so that whenever such companies [as Clear Harbour] come to Dominica we will have the infrastructure to facilitate their survival here in this country,” Darroux stated.

According to Honourable Darroux “the Government of Dominica remains committed to this sector, towards developing [it] and finding new opportunities especially for the development of Information Technology on this island.”