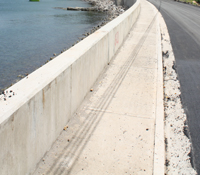 The Government of Dominica plans to source over $50 million US dollars in loans and grants to respond to damage caused by natural disasters on the east coast of the island.

The Prime Minister told a meeting called by the National Emergency Planning Organisation (NEP0) last week that his Government is in the process of sourcing funds from partners such as the European Union and the World Bank.

“We are going to be contracting a loan from the World Bank, we have not confirmed it yet but we are looking at it of a very huge sum to address the issues on the east coast. We have gotten a grant from the European Union to put with that and we are also looking at a third source to ensure that we can address the situation of the entire east coast of Dominica”, the Prime Minister said.

The Prime Minister pointed out that Dominica is being viewed by the world as a model country in the manner in which it bounces back following natural disasters.

“I have always maintained that we respond in the most efficient manner and I believe Dominica has one of the best response mechanisms to disasters in the world. We respond very quickly and we are back on our feet in quick time “he pointed out.

The country’s leader said much of this can be attributed to the swift financial assistance granted to the island by friendly governments.

He cautioned however that due to the current difficult financial situation experienced by countries worldwide, it is especially important for Dominica to do all it can to minimize the impact of natural disasters.

“One has to recognize that we are operating in a very difficult global economic and fiscal period and therefore whatever we can do to minimize on the damage done by disasters we all have a moral obligation to do that because we are spending a lot of money to respond to disasters,” the Prime Minister concluded.