CARICOM AND US SIGNS TIFA AGREEMENT 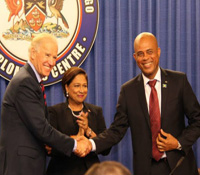 The execution of this agreement will be held under the CARICOM U.S. Trade and Investment Council led by a nominee of the CARICOM Chair and the Office of the United States Trade Representative.

Areas for attention placed in the initial action agenda, include matters relating to the World Trade Organization; Cooperation in Regional and Multilateral Areas; Support for Regional Integration; Cooperation to Promote and Respect Fundamental Labor Rights, and Workforce Development among others.

Other issues of importance to CARICOM in relation to export development are the threat faced by CARICOM exports of rum in the US Market, and the US/Antigua and Barbuda Cross-Border Gambling Services Dispute.

TIFA establishes the framework for the discussion of issues to address the digital divide through the promotion of innovation and the dissemination of technology for increasing competitiveness, job creation, economic development and trade.

The signing of TIFA signaled the formal launch of the revitalized Trade and Investment Council which would be essential for CARICOM and the U.S. to engage in the areas mentioned.

A first meeting is predicted before the end of 2013.