St. Joseph Primary to be renamed after the late Kaleb Laurent 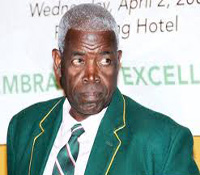 Plans are to rename the St. Joseph Primary school after prominent sports personality and former Member of Parliament the late Kaleb John Laurent.

Parliamentary Representative for the St. Joseph Hon. Kelvar Darroux in an interview with the Government Information Service (GIS) on Friday said the Cabinet of Dominica took a decision to have the St. Joseph Junior School renamed after the late Kaleb John Laurent.

“As we are aware Mr. Kaleb Laurent was a past Member of Parliament for the St.Joseph constituency, he served under the Freedom Party. Mr. Laurent also served as a member of the St. Joseph Village council for several years” stated Darroux.

He added that the sterling contributions of Laurent to his community and Dominica made him an ideal person after which the school should be renamed.

“He was an outstanding sports personality in the community molding several young men in becoming great sporting icons. He also was a member of the Reunion Committee and served in several other capacities” the parliamentary representative said.

Hon. Darroux said the late Laurent also played an integral role in designing the emblem of the St. Joseph Junior School as well as the St. Joseph Steel Pan Orchestra.

“Many of the students who attend that school were in fact members of that steel orchestra” said Darroux.

The official renaming ceremony is planned for September in time for the start of the new school year.