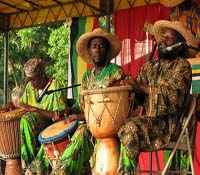 The Government of Dominica sees its continued investment in DOMFESTA as an important contribution to the country’s economic and cultural development.

At the media launch of Dominica Festival of the Arts (DOMFESTA), held last Wednesday at the Old Mill Cultural Centre, Hon. Justina Charles, Minister for Culture, remarked that this festival corresponds with Government’s policy to support local artists and sustain the arts in Dominica.

This course of action is evidently flourishing, as according to Hon. Charles, 61 artists received assistance totalling $796, 600.

“We’ve seen 61 artists including musicians and cultural groups benefit.  They gained assistance through application to the Small Business Support Unit for upgrading their equipment and facilities,” she said.

“As a result of this assistance we have seen employment of 86 people on part-time and full-time basis. I want to say at this point that Government remains committed to continuing such support to our local artists in ensuring that we can preserve our culture and develop our own skills,” she remarked.

Hon. Charles further commented in her address that DOMFESTA is a great asset to the country’s economy as well as its culture.

According to her, above all, the festival provides an outlet for the artists to showcase and market their creativity and artistic skill.

“Festivals such as DOMFESTA provide an outlet for individuals and groups to demonstrate their creativity and talent and to present their work to the public. This gives a greater appreciation of the work of the various artists and the department of culture. It also provides an avenue for economic activity as artists seek to develop their business ventures.”

She went on to say that “Works of art, poetry, drama and music are useless to society and the individual creator if they are not displayed and marketed.”

Hon. Charles also made mention of the diversity in the festival’s events and its stakeholders.  She recognised the members of the private sector who continue to lend their financial support to the festival.

Although DOMFESTA is coordinated by the Cultural Division, the festival also includes events organised by various community groups such as drama and culture.  It is also well supported by private sector institutions.

Importantly, she noted that DOMFESTA is a major factor in the conservation and distribution of Dominica’s culture.  The Minister believes the festival has contributed to the preservation of the country’s Creole language.

Additionally, Minister Charles commended the initiative of the Cultural Division to document photos of Dominica’s heritage and to produce a DVD of the island’s traditional dances.

The Culture Minister expressed her best wishes for the success of the upcoming activities and encouraged the public to show their appreciation for the arts by making a special effort to support.

We have 171 guests and no members online