A call for the preservation of Dominica’s endemic birds 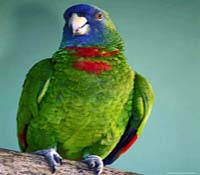 The Forestry Wildlife and Parks Division of the Ministry of Agriculture would like the public to get more involved in the conservation of the islands endemic birds.

This call has come as the Society for the conservation and Study of Caribbean Birds is placing emphasis this year on the life cycles of birds as part of the 2013 Caribbean Endemic Birds Festival.

Dominica’s Agriculture Minister Hon. Matthew Walter in an address to launch the 2013 Caribbean Endemic Birds Festival on Monday said bird conservation has always been a part of the Forestry Division’s plan to preserve Dominica’s bird species.

“In Dominica we had our own experiences in addressing issues of bird conservation” he said. The Minister noted that the best example of such is the work that has been accomplished over many years in the island’s attempt to save its parrots from destruction.

According to Minister Walter “The research has concluded that despite our best efforts, the parrots of Dominica, Sisserou and Jaco, are still very vulnerable to changes in weather conditions”.

The Minister noted that while the numbers of the Sisserou, and Jaco appear to be high, any severe hurricane or tropical storm system impacting on the natural habitat of the species will cause untold damage to the survival of the birds.

“Natural disasters have the potential to cause massive interruption to the life cycle of birds, disrupting their feeding regimes, breeding facilities and their security” he further pointed out.

Effective April 22nd, The Forestry and Wildlife Division will embark on a month-long programme of activities involving primary schools, hikers, and members of the general public.

The Minister has asked the public to participate in the activities planned.

The Caribbean Endemic Birds Festival has been celebrated regionally over the past twelve years from Earth day on April 22nd to World Biodiversity Day on May 22nd.

Ten years ago, Dominica joined the rest of the region in efforts at raising awareness about the Caribbean’s rich bird life, particularly the endemic species.

We have 152 guests and no members online