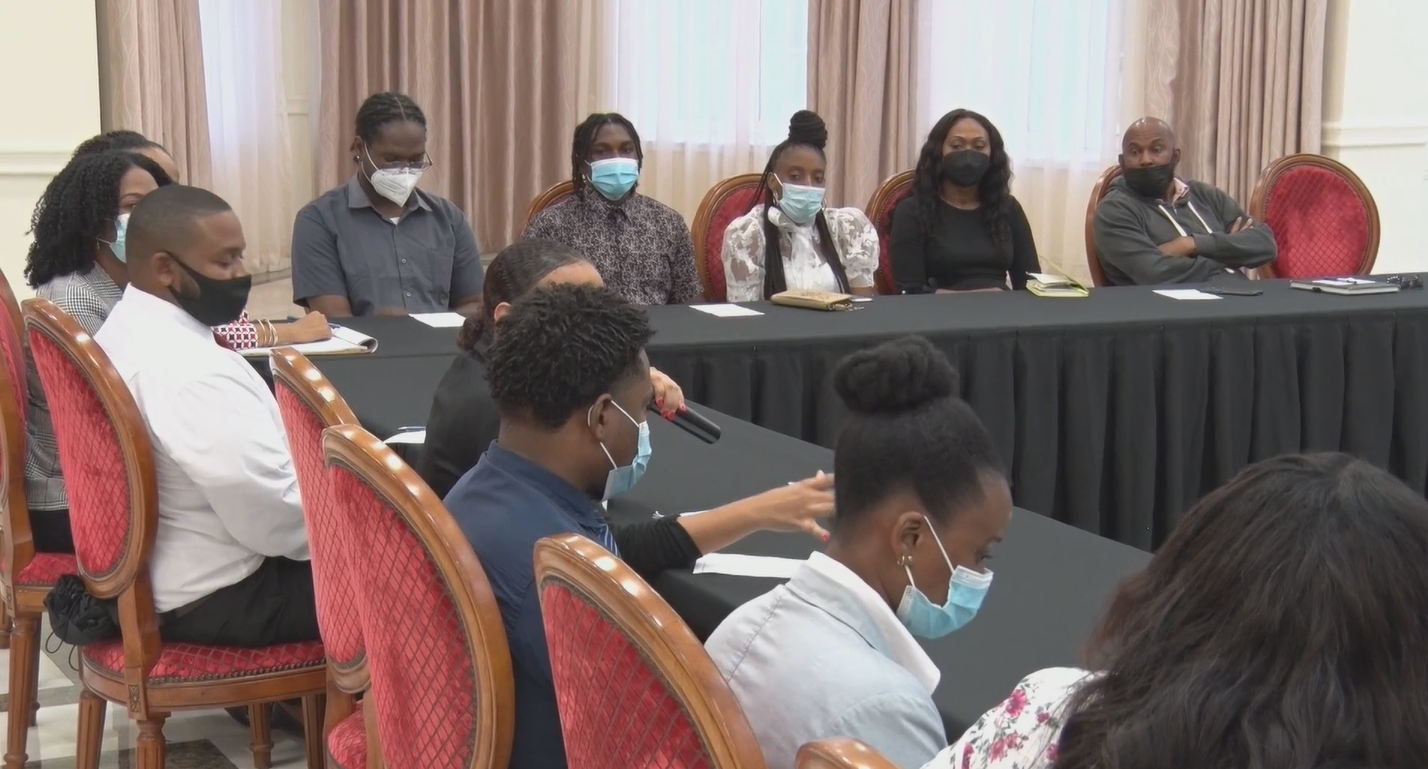 As the Government of Dominica continues to host pre budget consultations, the youth got their chance to engage the Prime Minister and other members of parliament on topics that they believe should be addressed in the 2022-2023 budget.

So far, consultations targeting small business owners and farmers have been held allowing the relevant stakeholders the opportunity to voice concerns and give suggestions that will benefit them and the country.

At the youth pre budget consultation held on Friday, July 1 at the State House, Prime Minister Hon. Roosevelt Skerrit says Government is here to listen to the suggestions of the youth.

“We are here essentially to listen to you as to what suggestions you have for the upcoming budget. Now obviously we are operating in a very interesting time with this pandemic that is still on and exacerbated by the Russia Ukraine situation. And there is no end in sight and it is getting increasingly more challenging. So how do we continue with our development efforts while at the same time confronting this challenge,” Hon. Skerrit stated.

Prime Minister Skerrit says the Government and the youth must work together for the development of Dominica.

“Let us work together towards the development of our country. So a lot rests with you the young people to play a bigger role in assisting in getting Dominica to where all of us want it to be. And I am very comforted by the fact that we have very constructive and committed young people who are prepared to play their part in the advancement of these efforts. We are here to listen to you, we will take notes, and there are things that have been suggested in past consultations that have made its way into policy formulation and programme development and so forth; so we are very open to this,” PM Skerrit added.

Meanwhile, President of the National Youth Council of Dominica, Ms. Ashma McDougall presented a few points on behalf of the youth. One of the main points was the reform of the education curriculum.

“We recognize that with curriculum review, it is a step in the right direction for all youth. In discussions with business owners and employers, human resource managers, a lot of them voiced the concern that they don’t feel that employees, specifically young people are necessarily ready when they step into the workforce. They don’t necessarily have the soft skills. So they go through fourteen years of formal education training and by the time they step into the workforce they don’t seem ready. And so it begs us to ask whether the current system that we have is necessarily preparing students for the workforce or are they just being taught to memorize information and regurgitate it,” Ms. McDougall stated.

Ms. McDougall says the demands of the country should be reflected in the curriculum taught in schools.

“We also wanted to propose the implementation or incorporation of financial literacy and money management within the curriculum. We recognize that a lot of young people have a spending and money management problem and we can’t blame them as we were never taught how to spend and budget and manage money during the many years of schooling that they were engaged in. what we recognize is that how we can do this is to integrate financial education into the school curriculum and this has to be part of a coordinated national strategy. It is important to first identify the basis of the needs that are necessary for the strategy to be implemented and obviously there must be support from the Ministry of Finance and Education with regards to that particular implementation,” the NYCD President explained.

Another major talking point suggested by the youth stakeholders is mental health and its effects on the youth.

Ms. McDougall says a review of Dominica’s mental health act as well as the implementation of a mental health policy should be in the cards for Dominica.

“Our proposition is for a review; because I mean from 1987 to now most of us were not even born yet; so I think it would be wise to consider reviewing and revising the Mental Health Act and as well putting some consultations together to consider drafting a Mental Health Policy for Dominica. It is a critical concern, we’re seeing effects in all different spheres and we have to understand the rippling effects that in itself has on an economy especially as we are moving towards building a Dynamic Dominica. If you have persons who feel safer, people who feel healthier, that in itself can lead to increased productivity,” she noted.

Investments into the establishment of a youth rehabilitation centre and the required staff was also suggested.

“Additionally, linkages to mental health are increased drug use and addiction and with the absence of rehabilitation centres, it is kind of impossible to see persons move from an addiction stage to being rehabilitated into society. It is quite difficult and so I think it would be very favorable and it would contribute to the economy largely if we consider investments in youth rehabilitation centres,” Ms. McDougall added.

We have 2722 guests and no members online