NEAR NINE MILLION DOLLARS FOR CONSTRUCTION OF HILLSBOROUGH BRIDGE 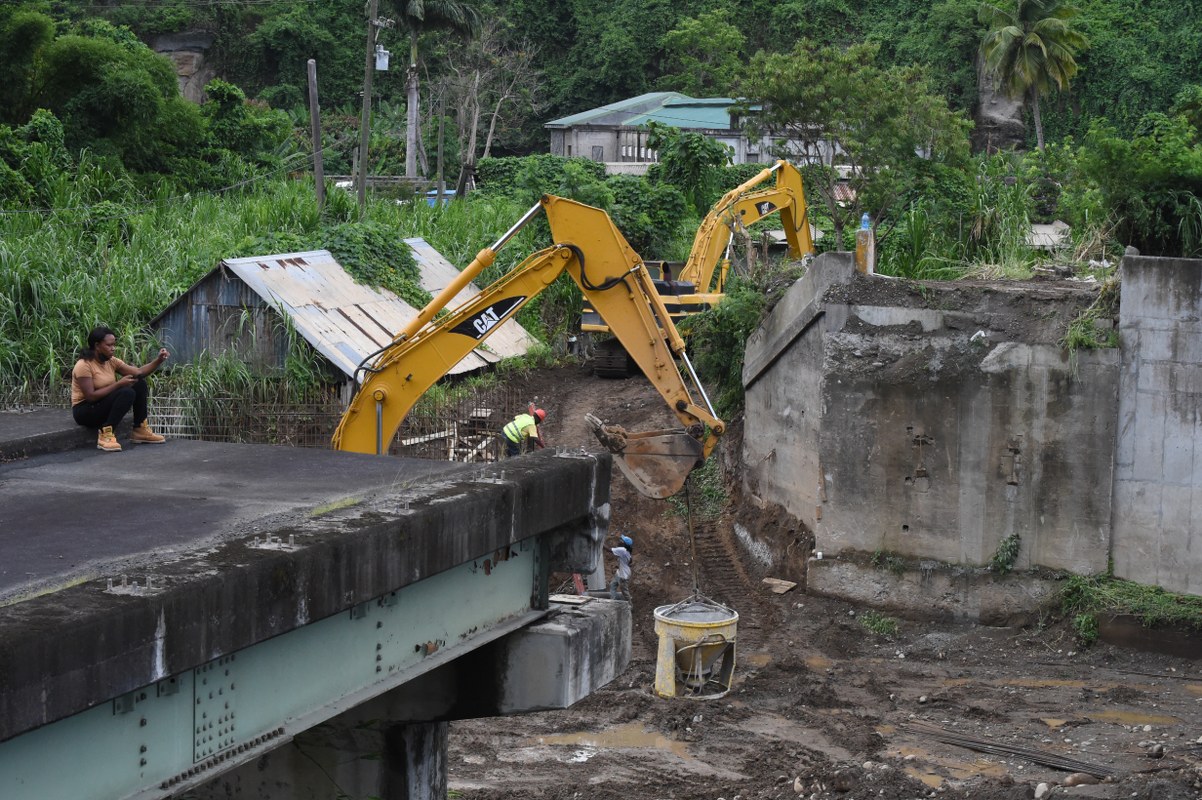 Almost nine million dollars is being spent on the construction of the Hillsborough Bridge.

The left lane of the Hillsborough Bridge in Layou, which is one of the main arteries connecting the North of the island to the city, was completely washed away by the passage of Hurricane Maria in 2017.

Since then commuters have been using the west lane to commute to and from Roseau, which has proven to be dangerous for road users.

Member of Parliament for the St. Joseph Constituency Hon. Dr. Adis King stated that this major project is part of the Government’s efforts to build resilience and keep citizens safe.

“This Government, although we are challenged economically like everywhere else in the world, we see it fit to ensure that our people are safe. As you will know, we have had accidents in the past on the west bridge due to commuters not being able to see that another vehicle is coming and we really want to put an end to that,” Dr. King stated.

The Parliamentary Representative expressed thanks to her constituents for their patience.

“I want to really thank the people of the St. Joseph constituency. They have been patient and they have been supportive and I want to tell them that the long awaited Layou Valley road will be also be here very soon. Work has begun and a lot of locals will be employed on these projects and I am very excited. So thank you,“ the St. Joseph MP added.

Minister for Public Works and the Digital Economy Hon. Cassanni Laville stated that steady progress is being made on the eight-million-dollar investment.

“This undertaking is an 8.9-million-dollar investment. The project is being done by the contractors, Offshore Civil and Marine. We were last here in April of this year to sign the contract and work commenced the next month on the 20th of May. Right now there is work ongoing and steady progress is being made,” Hon. Laville stated.

Minister Laville noted that due to the pandemic, the project was delayed, resulting in a month extension for the project.

“The project was expected to be completed on December 15 of this year, but we have allowed the contractor until January 17 2022 to hand over this project.  As you know with the challenges with Covid-19, there have been logistical issues all over the world with shipment; delays in the Panama Canal, the Suez Canal and so on; and for this project one of the major requirements was the purchase of some of the I-beams for this project, as well as the piles, the foundational elements that we required. But we have finally received them, but with a six to eight weeks delay. The contractor, notwithstanding, satisfied us that they will do their all to ensure that we have this project delivered by December to January,” the Public Works Minister explained.

Minister Laville further stated that the other structural components of the bridge will be finalized next week.

“In terms of the start of the project, we had seen commencement from May 20. However the public may have noticed that at some times there was little visible work. In that time period, what was being done was that the designs were being finalized and that component was also part of the contract. Of course the super elevation which is what we see on the bridge, the elements above the foundation, have been finalized however we will finalize the sub-structure components, that is below riverbed will be done towards the end of October,” Hon. Laville went on to say.
Minister Laville spoke in detail of the works to be done on the project saying “We will have the abutment being replaced and we will have the two bridge space being replaced also. We have to replace about ninety to a hundred feet of bridge deck and it is going to be approximately twenty feet wide.”

Civil Engineering Consultant within the Ministry of Public Works and the Digital Economy Mr. Kendall Johnson, further explained some of the work which will take place during the construction of the bridge.

“You will see the demolition and reconstruction of the east bridge. Subsequently we will bring in a crane to do some piling. We are going to strengthen the foundation of the pier because it is in the middle of the river. The old construction sat on the river bed. So we are going to be driving six piles down to a depth approaching 40 feet below the river, so a concrete pad and then build a new pier on top of it,” he explained.

Improvement works will also be done on the western section of the Hillsborough Bridge.

“We also want to do some improvement works on the western section of that bridge. We will be repainting the railings, doing some sand blasting and painting the bottom beams and replacing the construction joints on the old bridge,” Mr. Johnson explained.

The Government of Dominica continues to invest heavily in resilient infrastructural development across the island as the country continues on its path to become the first climate resilient nation in the world.

We have 176 guests and no members online