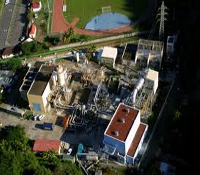 Energy Minister Hon. Rayburn Blackmoore will lead a team of Dominicans on a special visit to the Bouillant Geothermal Plant in Guadeloupe on Thursday January 17, 2013.

The team will comprise residents of the Roseau Valley, members of the local media and  other interested parties.

Minister Blackmoore told a press conference earlier this week that the visit is intended to give members of the team a better understanding of geothermal operations in Guadeloupe.

He says more importantly the visit will seek to convince the team that geothermal plants can in fact operate with minimal impact on the environment.

He said, “ What we are going to do is to afford the people of Laudat, members of the media and other interested parties a view of how a plant located in close proximity to residential areas can operate in an environmentally-friendly way.”

The planned visit to the Bouillant Geothermal plant in Guadeloupe is one of several efforts by Government to include all stakeholders in the process of developing Dominica’s geothermal energy.

Minister Blackmoore says Government will not be deterred by opposing voices to the project.

“We have to make a separation between the genuine concern of the people of Laudat and the other portions of the Valley and persons who have made it their vocation to derail anything that is good for the country. Let me assure those folks that their effort to undermine progress in this country will not wash away Government’s commitment to bringing prosperity to the people of Dominica.” the Minister emphasized.

Blackmoore says the Labor Party Government is convinced that geothermal energy will provide a cleaner and cheaper energy source for the people of Dominica.

“We believe that the greatest legacy that the Roosevelt Skerrit administration can leave for the people of Dominica is one of energy independence.”