Prime Minister Hon Roosevelt Skerrit is pleased with the progress made on expansion works at the Dominica State College. The Dominica leader, along with his team of Cabinet Ministers, on Monday, met with management, staff and students of the college, to discuss infrastructural developments currently taking place at the institution. 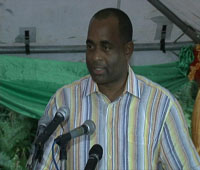 The Prime Minister is a former lecturer at the college, then known as the Clifton Dupigny Community College. He told reporters that the loan of $30 million dollars from the Chinese Government for the expansion of the tertiary institution is monies well spent.

“The government is very pleased with the progress and the quality of the work [taking place at the college] clearly, the structures are more expansive than one would have imagined based on the drawings and the conceptual designs and as they go along, we’ve been asking them to do additional things, and they have consented. But clearly in my respectful view, that project is about twenty to twenty-five years delayed.

“We cannot continue to have our students in our premier institution, in the second decade in the 21st Century, having to receive tuition in these buildings, clearly we have to do better than that. This is why the government stands firm in its decision to acquire a loan from the Government of China to construct this college.”

He says despite criticisms leveled at the institution, the Dominica State College has made significant progress in recent times.

“This college has helped in many regards to create greater access to our students, to the point where every child in this country who meets the basic requirements to come in and who wants to be in college has a space at this college and with the construction of this facility, we are on an onward march towards the acquisition of universal access to tertiary education insofar as an Associate Degree is concerned.”

The Prime Minister says his government is committed to investing in young people, “the leaders of today”, and so in spite of the current global economic crisis, the Dominica Labour Party has taken the decision to build this new state of the art facility for the benefit of the young people of this country.

Meanwhile, President of the Dominica State College, Dr Donald Peters said the expansion will enhance the learning environment at the institution. He gave a brief overview of the details of the expansion

“There will be a wi-fi centre, an agricultural centre…access for the handicapped, we have a whole new building where we are going to build a food court, so that our students will have access to a food court similar to Ross. More importantly, we have created a lot more space for our students…so we’ll have all of the things that a major college should have in the twenty-first century.”

The Dominica State College was instituted in 2002 with a population of over one thousand students. The college currently consists of three main campuses- The Nursing Institute, Faculty of Education and The Faculties of Arts and Sciences and Applied Arts and Technology.

Construction works are expected to be completed by December, 2012.