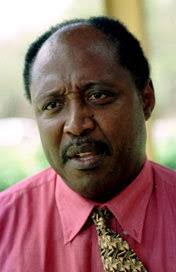 Roosevelt Bernard Douglas will be one of the names etched in the memories of many Dominicans for his heroism and love of country.

October 1st 2019, marked the nineteenth anniversary of his death and on October 15th 2019 the late Prime Minister would have been seventy-eight years old.

Rosie Douglas was the son of the late Robert Bernard Douglas, a wealthy businessman, coconut farmer, and conservative politician who named his boys after world statesmen. He was schooled in Dominica’s capital, Roseau, before being accepted to study agriculture at the Ontario Agricultural College in Kingston, Ontario, Canada.

Rosie Douglas became a Member of Parliament in 1985, but he only became leader of the Dominica Labour Party in 1992, after the death of his brother, Michael Douglas.

On February 3rd two thousand Rosie Douglas as he was affectionately known became Prime Minister of the Commonwealth of Dominica.

He was Dominica’s fifth Prime Minister and served the country faithfully for right months before his untimely death on October 1st 2000.

For his great work in the town of Portsmouth and Dominica by extension, the Portsmouth Government School was named after this great icon and is now known as the Roosevelt Douglas Primary School.

Son of the late Rosie Douglas, Ashani Douglas, told the students and those present that his father was an example to all around him.

Following his return from his studies Rosie pursued a broad range of political activity on the world stage getting involved with the socialist international, building relations with Cuba, The People's Republic of China, and the Soviet Union securing hundreds of scholarships for Dominican students. Through his Dominica/China Friendship Association, Douglas led Dominica’s first diplomatic mission to china in 1984 along with then Portsmouth mayor Renwick Jean Pierre securing a commitment from the Chinese Government of one million US dollars for projects for the town of Portsmouth.

Nephew of the late Prime Minister and Parliamentary Representative for the Portsmouth Constituency, Honourable Ian Douglas, remembered his uncle as someone who lived for others, someone who gave his life for service.

“I want you all to remember this quote. ‘If you live for yourself, u live in vain; if you live for others you live again.’ And that was what Rosie’s life really exemplified, living for others. Ever since Rosie was a young boy, Rosie grew up with the custom of giving to others. Rosie’ mother and father, were people who by today’s standards you would call rich. His mother had a store and she was a very generous woman, a very charitable woman and she would give to those in need very, very often. And she would make packages with items from the store on Saturday afternoons, and Rosie and his brothers and sisters had to go and deliver those packages of groceries to the less fortunate in the community,” Honourable Douglas stated.

The Government of Dominica, last month handed over seventy homes in Georgetown to families deserving of housing. Prime Minister the Honourable Roosevelt Skerrit made the announcement that this great housing development will the Rosie Douglas housing development.

“We have decided to name this housing development in honour of our late Parliamentary Representative and Prime Minister Rosie Douglas. So this development will be known as the Rosie Douglas Housing Development. Now all of us know Rosie stood for many important things and I will tell you but a few. And if we are going to name the place after Rosie, who have been good to so many of us in Dominica, we have to maintain the place clean, you have to keep the flowers planted and no noise among neighbours,” the Prime Minister added.

The Dominica Labour Party continues to honour the legacy of the late Roosevelt Douglas ensuring the younger generation embraces his contribution to Dominica’s development.