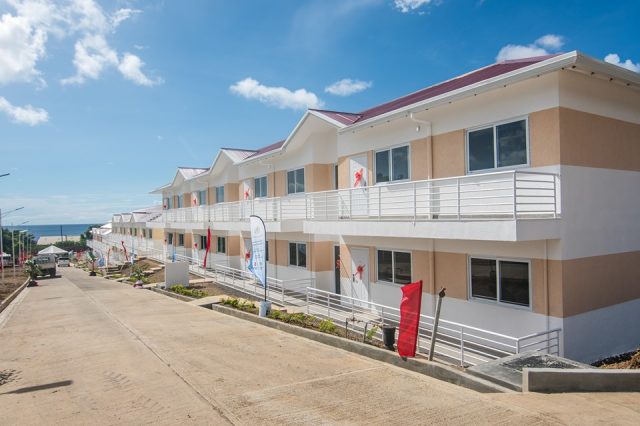 The keys were handed over at an official ceremony held in Georgetown on Saturday 14th September 2019.

Prime Minister, Honourable Dr Roosevelt Skerrit stated that the Dominica Labour Party Administration has always been a Government which aims to better the lives of all citizens while raising the standard of living for all.

“The party which I have had the honour to lead for some time now,  has always recognized the need to raise people up, and all our actions, our policies, our programmes, is about taking you from wherever you are and lifting you up; instilling in all of us, a sense of pride,” Prime Minister Skerrit stated.

He went on to say that he is confident and proud to say that his Government is the only Government in the Caribbean embarking on such projects, noting that “this speaks volumes to the caring attitude displayed by this government.”

PM Skerrit added that his Government cannot be challenged on performance in Dominica.

“I challenge anybody listening to me today, to tell me where in the Caribbean any Government is able to hand over these kinds of homes to their citizens. And we not here handing homes to the middle class and upper middle class, we are handing home to those who are in need. So we are taking people from their T1-11 homes to a climate resilient home in this town of Portsmouth. And if that is not development, then tell me what it is,” the Prime Minister noted.

These housing developments have been financed by Dominica’s Citizenship by Investment Programme, which is one of the most reputable in the world. Prime Minister Skerrit noted that the housing development is only one example of the many tangible benefits of the Citizenship by Investment Programme, especially in the recovery of Dominica post Hurricane Maria.

“This is the only party that can point to things, infrastructure, housing, that have been done in this country, utilising these funds. And so we are grateful for this medium of raising funds. Because I can tell you as the Minister for Finance that had it not been for the CBI funds, and not only the CBI funds in itself, but the prudent management of the funds, we would have been in great difficulties after Hurricane Maria,” he added.

As a tribute to Dominica’s late Prime Minister and former Member of Parliament for the Portsmouth Constituency, Honourable Roosevelt Douglas, the Government took a decision to name the new housing development, the Rosie Douglas Housing Development.

“We have decided to name this housing development in honour of our late Pal Reo and Prime Minister Rosie Douglas. So this development will be known as the Rosie Douglas Housing Development. Now all of us know Rosie stood for many important things; and if we going to name the place after Rosie, who has been good to so many of us, we have to maintain the place and keep it clean,” Prime Minister Skerrit announced.

Parliamentary Representative for the Portsmouth Constituency, Honourable Ian Douglas, stated that he is happy that his constituents have benefitted from the Government’s Housing Programme. Honourable Douglas noted that the Government has kept its promise to the residents and has delivered.

He then reassured other constituents that they will also benefit from the program as time passes.