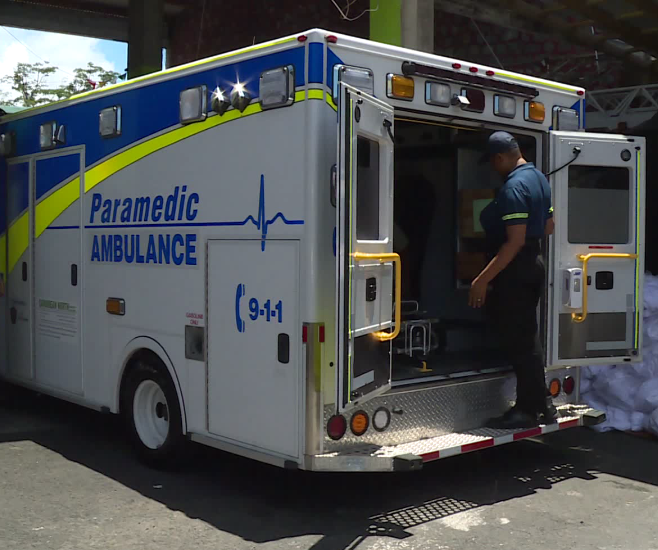 The Dominica Fire and Ambulance Service has added another ambulance to its fleet, thanks to the Caribbean North Charities Foundation.

The Caribbean North Charities Foundation operates out of Canada and assists countries in various aspects.

Following the passage of Hurricane Maria in September 2017, the foundation sent relief supplies to Dominica.

A handing over ceremony was held at the headquarters of the Fire and Ambulance Service on Thursday.

Minister for Justice, Immigration and National Security, Honourable Rayburn Blackmoore, thanked the foundation for this donation.

“I want on behalf the Government and the people of Dominica to express the most profound manner my gratitude for this very generous gift here today, which will go a long way in actually improving the delivery so far as health care is concerned,” the minister stated.

Honourable Blackmoore noted that the addition of this new ambulance will curb the challenges faced in the health districts in reference to the fire and ambulance service.

“We have of course in the recent past experienced some difficulties in the second town of Portsmouth, so what we are having here will actually help us to have some improvement so far as ambulance service is concerned in the Portsmouth area. I have been advised that this ambulance here, which is fully equipped, so far as accessories are concerned, will effectively service the Roseau catchment area,” he went on to state.

Minister Blackmoore say the officers who will be manning the vehicle will do it with pride and take care of this gift.

“I am very much confident that the officers who are going to be manning that vehicle will demonstrate the highest degree of ownership by caring for it and driving it in a responsible manner because that’s what they are trained to do. so I want to give you the assurance that the fire officers in Dominica are trained in first aid etc and I can give the assurance that they will take pride in manning this ambulance” Honourable Blackmoore further added.

Director of Hurricane Relief for the Caribbean North Foundation and Dominican born, Frances Delsol, says that these countries has shown commitment to assisting Dominica.

She too took the opportunity to thank the foundation for assisting Dominica, adding that the foundation provided assistance to Dominica after the two major storm to hit the island in recent years.

“After Erika they assisted us but after Maria they really came through for Dominica and shipped fourteen 40-feet containers with supplies including two hundred mattresses, and beds which were all brand new as we got them from Toronto Police Services. All the containers were shipped through the kind assistance of the Caribbean North Charities, so we would not have been able to do it,” Delsol stated.

“So not only did they donate the ambulance, they have been helping us, they helped after Erika, they helped after Maria and they continue to help us. So, they are always keeping Dominica present in whatever work they do in Toronto so I want to personally say to you in this forum thank you for your efforts,” she added.