MINISTRY OF AGRICULTURE TO BENEFIT FROM 67.9-MILLION-DOLLAR AGREEMENT WITH WORLD BANK 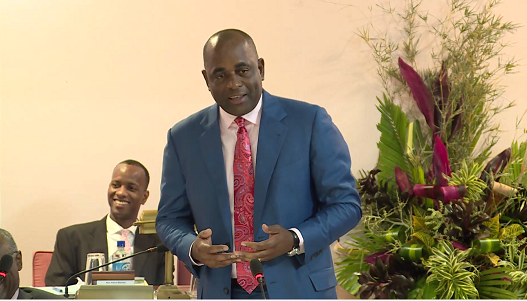 A financial package of 67.9 million dollars have been negotiated between the Government of Dominica and the World Bank for the further development of the Ministry of Agriculture, Food and Fisheries.

This was revealed at the 2019/2020 Annual Budget Presentation held on Tuesday, July 30th, and was presented by the Prime Minister of Dominica and Minister for Finance and Investments, Honourable Roosevelt Skerrit.

The Prime Minister stated that this negotiation came about as the Government recognizes the important role agriculture plays in food security and job creation and the impact which it has on the balance of trade and the economy as a whole.

It was noted that the interventions will be geared towards the restoration of the productive base for recovery of agricultural livelihoods at a total cost of 44.8 million dollars.

According to PM Skerrit the project will consist of three components, each aimed at developing the agriculture sector with various investments.

“Subcomponent one, involves the restoration of cropping systems and is valued at 25.3 million dollars. Support will be provided for the recovery and increase in the production capacity of small and medium sized crop farmers growing dasheen, tannia, yam, sweet potato, banana, vegetables as well as commercially oriented farmers inserted into value chains generally producing perennial crops and fruits such as coconuts, cocoa, citrus, ginger, avocado and coffee,” PM Skerrit stated.

This support will result in enhanced food security for small and medium sized households, particularly those headed by women, and even greater volumes of fresh produce in our local markets, further helping the sector in retaining its market share against competition from imported fruits and vegetables.

Sub-component two will aid in the revamping of the livelihoods of the farmers while building their capabilities.

The Prime Minister added that “farmers will be provided with incentives for investments in developing livestock and fisheries through adoption of highly productive and climate-smart technologies and enhancing resilience in the long run.”

The livestock interventions aim to re-establish the livestock production base that was severely damaged by hurricane Maria and build a more sustainable and climate resilient sector.

The interventions are aimed at supporting targeted commercial livestock farmers, providing targeted technical assistance in management of livestock systems and adoption of modern technology and mechanisms to increase resilience; and carrying out training and capacity building activities on feeding, breeding and preventive animal health care.

The focal point of the third component will be the development and sustaining agribusiness across the island which will improve the country’s ability to export on a regular basis.

“This sub component which will focus on agribusiness, will contribute to building agribusiness capabilities among small-to medium-size crop and livestock farmers and fisherfolk who would have benefited under subcomponents one and two. This will assist the country to boost its regional and international agricultural market share. Once implemented, the subcomponent envisages building marketing and agribusiness capabilities,” Prime Minister Skerrit further added.