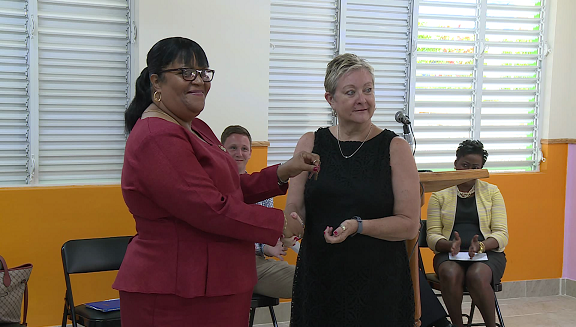 The Trafalgar Primary School is one of six primary schools on island which will benefit from the support of the Maria Holder Memorial Trust. The Trust is has embarked on a project to refurbish and rebuild six primary schools which suffered extensive damage from hurricane Maria in 2017.

The project is being executed in two phases. The first phase is now complete and entailed the refurbishment of the Belles, Concord, Warner and Trafalgar Primary Schools along with a new Pre-Kindergarten Unit at Trafalgar. The works included new windows and doors, repairs to kitchens and roofs, painting, fencing, and the upgrading of bathrooms.

On Tuesday January 29, the foundation handed over the keys to the refurbished Trafalgar Primary School. Speaking at the handover ceremony, Principal of the Trafalgar Primary School Mr Jerry Coipel says, he envisions many new opportunities for the school’s future as  teachers are  in a better environment to teach their students.

“The learning condition of the students are the teaching conditions of teachers. Therefore if our students are in a good environment we expect them to do very well and the teachers themselves are expected to go the extra mile, use their creativity and prove their teaching skills.”

According to Chief Education Officer Mrs Melena Fontaine, the Second phase will include the building of new Pre-Kindergarten Units at Belles, Concord, Warner and Roseau.  “In the next three months, we will see the building of the extensions to facilitate the new ECU facilities at Belles, Concord, Warner and Roseau primary – in some of them classroom space for grade K students will also be included.”

Thanking the foundation for its support Fontaine added, these projects fit right into the country’s aim to building back better as they follow recommendations for climate resilience.

“It is important to note that all efforts have been made to build back better, adhering to the building codes of Dominica and the guidelines for climate resiliency. So far, consideration was given to covered walkways, exposed drains, and fencing to protect property and its contents.”

The Wotten Waven Primary School is the sixth school slated for improvements. The Maria Holder Memorial Trust continues to make its mark across the Caribbean in tangible and transformational ways. This project will contribute significantly to the cognitive, social and economic benefits in these communities as it creates greater access to Early Childhood Education in the Commonwealth of Dominica. 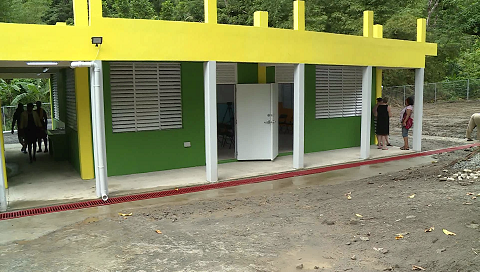