Over $700,000 For Supporting Sustainable Ecosystems 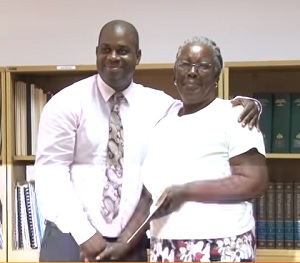 On Friday June 8, the Government of Dominica, through the Ministry of Environment, Climate Resilience, Disaster Management and Urban Renewal awarded certificates and cheques to farmers in the Morne Trois Piton National Park vicinity.

This gesture is aimed at empowering these farmers and farmer groups to not only recover from the effects of hurricane Maria but to become co-managers of the heritage site.

After the passage of Hurricane Maria, the Project Coordinator and UNDP team visited the affected communities and concluded that farmers required urgent assistance to reinstate their means of livelihood.

Speaking at the handing over ceremony, the Hon Prime Minister and Minister for Finance expressed that empowering these farmers will ensure the sustainability of their livelihoods while preserving the natural environment.

“We have to find sustainable ways to benefit from the environment,” the Prime Minister said.

“The recipients of assistance from this list should consider this gesture as the commencement of a new dawn in the quest to co-manage the Morne Trois Piton National Park on behalf of the world,” the Hon. Minister for Environment, Joseph Isaac, said as he called on farmers to get involved in the preservation of the national park. “We want the communities, families and individuals living near the boundaries of the national park to see yourselves as special stakeholders,” he said.

Some of the recipient groups include the Delices Toloma Women in Action, WrimCrop and the Southeast Women Farming Organic Group.

The Morne Trois Piton National Park was established in 1975 by an act of parliament.