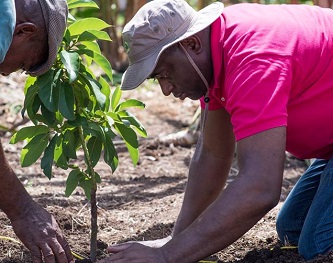 Tuesday, June 5th was recognized as World Environment Day and that day was marked in Dominica with tree-planting exercise geared at restoring and preserving the island’s natural environment.

World Environment Day is a United Nations branded day for encouraging worldwide awareness and action for the protection of the environment. The movement began in 1974 and has since become widely celebrated.

This year’s theme is ‘Beat Plastic Pollution’. it is an invitation for people the world over to change their actions and reduce plastic pollution in the environment.

After having much of the island’s forest and greenery lost to Hurricane Maria last year the focus in Dominica for World Environment day was the replanting of trees.

Through a social media post, the nation’s leader encouraged nationals to do the same saying that it is important that we feed ourselves.

The government of Dominica has an ongoing commitment to conserving and enhancing Dominica by placing the national employment beautification teams in every constituency, Hon Skerrit said further.

The Hon Minister for Environment, Climate Resilience, Disaster Management and Urban Renewal, Joseph Isaac recognized the day with a tree-planting ceremony at the Botanic gardens in Roseau where he engaged number of students in the exercise.

Speaking at a brief ceremony at the Botanic Gardens, Hon Isaac said he considered the exercise the beginning of a revolution for restoring and protecting Dominica’s natural environment. 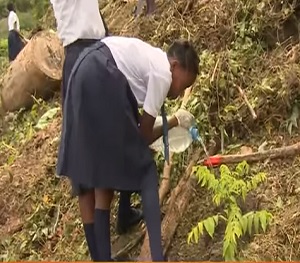 “Today is a revolution in Dominica in regard to our environment,” Hon Isaac said. “We want you [students] to understand the importance of keeping your environment clean and ensuring that we have healthy living in Dominica. So, when we plant one tree today, it is the beginning of building a better, stronger and more resilient Dominica.”

The minister announced that a tree planting mission, among other activities will be launched for across the island. The intention is plant trees in every villages and on beaches across the length and breadth of Dominica, he stated.