New Primary School On The Cards For Grand Bay 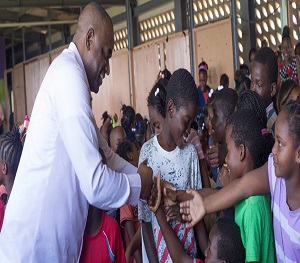 The community of Grand Bay will be receiving a new primary school.

This was announced by the Hon Prime Minister, Dr Roosevelt Skerrit, when he, accompanied by his wife, visited the school on Thursday.

The Grand Bay primary school was built in 1971 by the government of Canada. After the passage of hurricane Maria in September last year, the school building was left in a state of disrepair.

The Hon Prime Minister noted that considering the age of the structure, it would be better to rebuild than to renovate.

The Canadian Government has also pledged to rebuild the new school along with the Caribbean Development Bank (CDB). Hon Skerrit assured that “the funds are committed and the delegation from the bank and the Canadian Government together with the Parliamentary Representative, Justina Charles visited the site earlier this week to begin a “feasibility study in preparation of the documents for the design and construction of the new school.”

During his visit, Hon Skerrit also presented a cheque of $5,000 towards the school’s outreach programme and announced that Government would begin paying the school fee for the pre-schoolers.

The Prime Minister also pledged his office’s support in recommencing the school feeding programme as early as next week. The cooks will be employed under the National Employment Programme.