Special Police Unit To Be Established 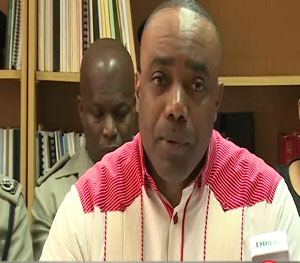 ecialized unit, equipped with specific skills, within the special service unit is in the pipeline for Dominica’s police force.

That announcement came from the Hon. Minister for Justice, Immigration and National Security, Rayburn Blackmoore, earlier this month.

Speaking at a press briefing, the minister commented that having this unit will allow for both internal and civil defense issues to be dealt with simultaneously.

“What we want to ensure is that to have a specialized unit in the SSU that is fully reserved. So, they can respond to issues of internal security and to have a situation whereby you can have the SSU responding to civil defense issues,” he explained.

He referenced the occasions of regional defense forces coming to Dominica’s aid and being armed with special skills besides those of security and policing.

The minister explained that it is at this level at which Government wishes to train the special police unit.

“Members of the regional forces, more so, from the Jamaican Defense Force [who came here], they were embraced [because] they came down with certain skill sets; and if we are talking about a climate resilient country we have to ensure within the various structures… more so the national security structure, we have persons with those kinds of skills sets which are relevant to our survival,” he said.

Silencing naysayers on this move, Hon Blackmoore expressed that he believes the addition to the police force can bring national benefit.

“I think the government getting additional resources to augment the capabilities of the police force is something that is important for all of us and should not be seen as a move for building a military state,” he said.