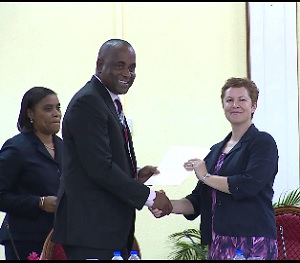 Government officially launched the Climate Resilience Execution Agency of Dominica (CREAD) at a formal ceremony at the Goodwill Parish Hall on Friday.

The Hon Prime Minister, Dr Roosevelt Skerrit called the decision to make Dominica the first climate resilient nation in the world, a choice to walk a difficult road which has not been traversed before.

He says therefore the need for a fully integrated plan to achieve the goal set for climate resilience is needed.

“We must break down our journey into manageable stages, into a well-coordinated, carefully sequenced set of projects, annual plans and realistic six-month targets; and that is another reason why we need CREAD,” he said.

The Prime Minister also indicated that time is of the essence in the decision-making and execution of the functions of CREAD..

“Time is not on our side, sea levels continue to rise, temperatures are mounting and another hurricane season beckons. As long as there are Dominicans who remain at risk from a climate disaster our task is unfinished and progress must be faster.”

The agency now has a transition committee and it is anticipated that within three months an independent agency will be legislated. The Hon Minister for Foreign Affairs and CARICOM Affairs, Francine Baron is Chair of that transition team.

Secretary to the Cabinet, Ambassador Steve Ferrol; Financial Secretary, Rosamund Edwards; Permanent Secretary in the Ministry of Planning, Gloria Joseph; Principal Advisor to the Prime Minister, Ambassador Edward Lambert and Special Economic Advisor to the Prime Minister, Professor Avinash Persaud are the other members on the transition committee.

The governments of the United Kingdom and Canada, and the United Nations Development Programme have partnered with Dominica for the establishment of this climate resilience agency.

The nation’s leader profusely thanked all the countries which have stood with Dominica in its time of need and in its quest rebuild stronger.

The Dominica leader reaffirmed his commitment for a stronger Dominica.

We have 210 guests and one member online