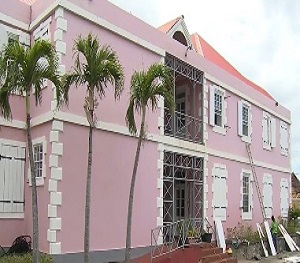 lerk of the House of Assembly, Daniel James has provided an official report of ongoing works at the House of Parliament following damage caused by Hurricane Maria.

Like several other public buildings, the House of Parliament suffered major damage to its infrastructure.

James reported that among the damages, the main gate to the entrance had been ripped off and on the eastern wing of the building, the roof was partially damaged which caused flooding to most of the building. Most of the hurricane-proof shutters, several doors and windows were also “damaged or missing.”

James explained that repairs to the building began on December 2, 2017 with the help of the Trinidad Defence Force.

He says while repair works have been ongoing limited materials, labour and the inclement weather have posed challenges.

However, despite this he said, work has been done to re-roof the eastern wing housing the parliamentary offices of the Prime Minister and Leader of the Opposition as well as the kitchenette and eating areas.

while there is still some work left to be done including replacement of the air conditioning system.