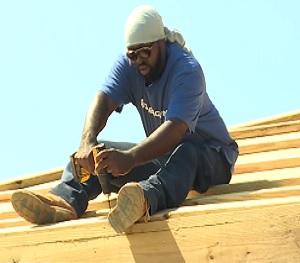 The Mahaut Village Council has received $2 million from Government, which is the first phase of disbursements under government’s programme to help citizens replace roofs lost as a result of Hurricane Maria.

Mahaut, which is one of the largest constituencies, suffered tremendous damage and several houses in that locality lost their covering.

The Hon Prime Minister and Finance Minister, Roosevelt Skerrit was present for the handing over of the cheque at a small ceremony in Mahaut last Friday.

Hon Skerrit is hoping that most homes in Dominica will be covered by the end of May.

“It means therefore, that we as contractors, skilled and unskilled workers are going to have to be diligent,” he said.

He appealed to contractors and skilled and semi-skilled workers to be focused, committed and exemplary in their work performance saying “we are working against time and time lost cannot be regained.”

The Hon Member of Parliament for Mahaut, Rayburn Blackmoore says that the needs assessment of his constituency alone has amounted to more than $11 million. While in excess of $8 million has been approved, Friday’s cheque presentation of $2 million represents the first phase of disbursement of funds to assist the people.

The parliamentary Representative says this gesture by Government is a necessity as not everyone in the rebuilding process will be able to assist themselves.

“For one, you have a category of people who have no insurance policies…and then you have [another] set of people who have insurance coverage but they would have gotten themselves out of pocket…and then there are also persons who are working in the private sector or in the government service and notwithstanding the fact that we have special facilities through government at the AID bank and the Housing and Loans Board, they have insurance too but they may have found themselves out of pocket …because their salaries are fully committed they cannot contract one more loan.”

These are some of the reasons why the Member of Parliament says Government is assisting, however he implored that those who are able to help themselves should do so speedily before the next hurricane season.

The Mahaut MP explained that the programme will be closely monitored by the Housing Division to ensure that roof replacements are done in accordance with the revised building standards.

Funding for this re-roofing programme will be made available in phases throughout the 21 constituencies. Government has also procured building materials to help citizens meet the cost of repairing their homes.