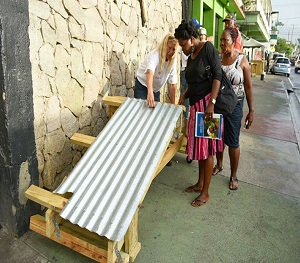 Roseau, Dominica, 28 February, 2018— The Ministry of Planning, Economic Development and Investment with the support of the United Nations Development Programme (UNDP) and Engineers Without Borders (EWB) continued to partner to advocate for building resiliency in Dominica post Hurricane Maria. A model roof designed and built by the EWB team will be on display at various locations across the island.

First seen at the Carnival Monday Parade on 12 February 2018, the model roof has been an effective way to engage Dominicans in discussion on building back better. Five model roofs have been built and these, along with the revised Guide to Dominica´s Housing Standards, also advanced by the Ministry of Planning, UNDP and EWB, are critical to advocacy and education for building back better.

“Apart from being a tangible example of a resilient roof, it has been a great communication tool,” says Benjie Hayek of EWB.

“It really gets us great feedback from members of the public who are seeking information from us and who are sharing their Hurricane Maria experience,” she added.

For the Permanent Secretary in the Ministry of Planning, Mrs. Gloria Joseph, the roof and document complement each other for outreach efforts.

“While members of the public can interact with the mobile roof, i.e. see and touch, they cannot go home with it and so the Guide enables them to reference what they have learnt, not just when they actually have to rebuild but throughout the entire process from planning to buying materials. It is a ready reference they can carry with them in various stages of the rebuilding process and that goes a long way in supporting the efforts of the Ministry,” she stated.

To date, the roof has been displayed at EH Charles and Rudolph Thomas hardware stores in Roseau and Portsmouth respectively as well as the government headquarters and Roseau Market. A town hall meeting was held on Wednesday 21 February 2018 at the Credit Union Hall in Portsmouth, where a cross section of the community attended a discussion on building back better.

Senior Development Control Officer and officer for the North in the Physical Planning Division, Joseph Fontaine, was very encouraged by the feedback from the audience.

“The persons who attended included home owners, contractors and material suppliers, all of whom were affected by Maria in one way or another. They asked pertinent and very technically specific questions, and were very eager to apply the changes we have suggested as they rebuild. So as someone who has to, at some point, inspect their structures, this is very encouraging.”

This week the model roof was on display in Grand Bay on Monday and Marigot the following day and will be on display for the rest of the week as follows:

Thursday 1st March 2018: Kalinago Territory at the St. Cyr Resource Centre from 9:30am

Other dates and locations will be announced in the coming weeks.