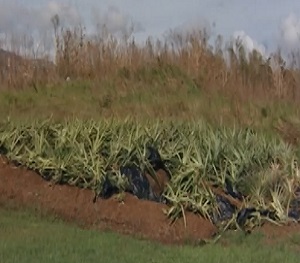 The Agriculture and Fisheries sectors, next to Housing, were the hardest hit by Hurricane Maria.

Assessments after Hurricane Maria revealed that near one hundred percent of Dominica’s agriculture was wiped out.

According to reports from the Permanent Secretary in the Ministry of Agriculture, Dr Reginald Thomas, that damage quantifies to over $700 million.

“Agriculture, and we refer here to crop and livestock, suffered about $480 million, forestry about $149 million, fisheries $80 million, a total loss of about $709 million. If we were to quantify the other associated losses, I’m sure that would be much greater in terms of the loss and the impact to agriculture,” he said.

The Permanent Secretary detailed the effects of Maria on the Agriculture sector saying, “We had severe soil erosion, organic matter and nutrient loss, loss of arable lands required for production; loss of production (livestock and crop) particularly our poultry sector where we lost almost 95% of that production…. loss of revenue and livelihoods; severe damage to the terrestrial and marine habitats, destruction of our reefs, destruction of our nature sites.

Dr. Thomas was addressing a national rebuilding and economic partnership consultation on February 19.