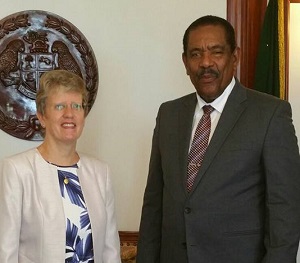 New High Commissioner of the United Kingdom to Dominica, Her Excellency Janet Elizabeth Douglas, on Wednesday, presented her credentials to the President of Dominica, His Excellency Charles Savarin.

His Excellency Savarin noted that the United Kingdom continues to be one of Dominica’s main development partners because of the close historical ties and trade relations that exist between the two countries.

The United Kingdom played a key role in Dominica’s recovery efforts after the Passage of Hurricane Maria. His Excellency Charles Savarin took the opportunity to outline some of the ways in which the UK contributed.

“We were provided with much-needed medical supplies and water, an aid package of £5m and additional $19m through the UK-funded Caribbean Catastrophe Risk Insurance facility.  This show of solidarity and support was further augmented by the official visit of His Royal Highness Prince Charles, Prince of Wales of November 19, 2017,” he said.

“In the months since the hurricane, the United Kingdom has continued to support Dominica as she starts to rebuild.  Over the next few years, we plan to provide over £65m of funding including £25m for reconstruction in the water sector, major road and health infrastructure projects, geothermal energy development and support for the economic development and skills training,” she said.

The New High commissioner also revealed that the United Kingdom is working with Dominica to establish a dedicated delivery agency to lead the recovery process.