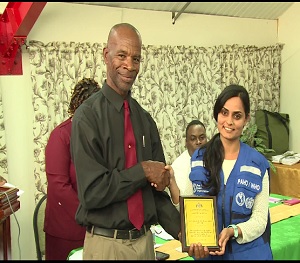 The Ministry of Health held an official ceremony to thank volunteers and organisations which came to the aid of  Dominica’s health care system following Hurricane Maria.

The appreciation ceremony was held at the Polyclinic conference room at the Princess Margaret Hospital on Tuesday.

Permanent Secretary in the Ministry of Health, Davis Letang spoke on behalf of the Hon Minister for Health, Dr Kenneth Darroux.

“The impact of Hurricane Maria at the level of primary and secondary care posed a major challenge as several components of our health care system were seriously compromised,” he said.

The permanent secretary also cited challenges with access to pharmaceuticals, the information system, capacity to communicate and maintenance of an adequate workforce as some of the difficulties faced by the health care system in the aftermath of the storm.

“However, despite the challenges that I mentioned here, the Dominican public continually received health care services at both primary and secondary care level in our country and tertiary care overseas.  To date due to the commitment and resilience of our staff and very importantly the support of our friends and partners…the Ministry of Health and the Environment was able to maintain a level of health care service which has spared the population from serious major public health events,” he remarked.

At Tuesday’s ceremony representatives of the Pan American Health Organisation, Your Caribbean Nation, Isra-Aid, International Medical Corps, U.S. – Based Dominica Nurses In Action, and Americare were awarded for their contribution to Dominica.

Individual volunteers were also recognised for their outstanding contribution.

A few more volunteers have also recently arrived on island for the next month.

Meantime Dominica In Nurses Action of Houston, Texas presented a donation of nurses uniforms and medical supplies to the health team while the Dominica, Houston made the promise of a presentation of  a container of medical supplies which is already on island.