Paris, December 12, 2017 - Prime Minister Skerrit participated in the One Planet Summit as a panelist.

At the One Planet Summit in Paris, France, on December 12, 2017, Prime Minister Roosevelt Skerrit called on the international community to scale up investments in building climate change resilience. “In order to build resilience to climate 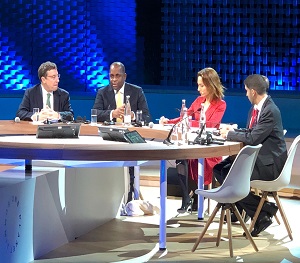 He highlighted the impact of hydro-meteorological events as well as slow onset events on Small Island Developing States (SIDS) like Dominica. The impact is becoming more severe and even more frequent.

According to Prime Minister Skerrit, there is unprecedented political will to stem the emission of greenhouse gases, gradually decarbonize the electricity sector and reduce reliance on carbon-based fuels for transportation.

Two years ago, the international community demonstrated these commitments with the Paris Climate Agreement and the creation of the Green Climate Fund (GCF).

“The challenge, however, is the in ability of countries, especially small states which are most adversely affected, to access the resources that have been committed to combating climate change. The complexities involved in procuring those funds compounded by the slow pace of disbursement, threaten to eliminate the gains made in Paris two years ago”.

He called for greater efforts in streamlining the processes to access these funds and to implement plans and programs to assist SIDS. He sighted the creation of the Climate Resilience Executing Agency of DOMINICA (CREAD) as one solution to address these challenges. Partnership between countries and the international community to streamline processes and to create the capacities for implementation will benefit beneficiaries as well as benefactors.

Prime Minister Skerrit thanked the international community for their support in responding to the impact of hurricane Maria on Dominica. He urged countries to continue to partner with the government and people of DOMINICA to create the first climate resilient nation.