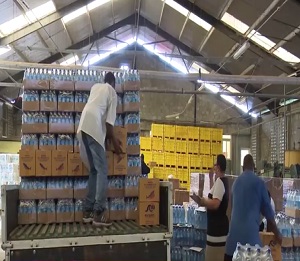 Dominica has made its first shipment to the countries which were battered by Hurricane Irma.

On Monday, the Hon Prime Minister, Dr Roosevelt Skerrit held a Press Conference to update the nation on his visit to Anguilla, Tortola and Antigua.

At that press conference, the Nation’s Leader made a commitment to send relief supplies to these islands.

On Tuesday, he delivered on this promise when four containers left the island for both Dutch and French St Martin and Anguilla.

At a press briefing on Wednesday, the Hon Minister for National Security, Rayburn Blackmoore, recalled that St. Martin was one of the first countries to assist Dominica after the passage of Tropical Storm Erika in 2015 and he was pleased that Dominica could return the favour.

“I think we are very much honoured to be lending support to these countries in a terrible time of need,” he said.

Hon Blackmoore commended the staff of the Office of Disaster Management, the driving force behind this humanitarian effort.

He also took the opportunity to thank the private sector for working collaboratively with Government by contributing non-perishable items.

On Wednesday, a mixed container was shipped to Tortola and is expected to arrive by this weekend.

Disaster Management Consultant, Cecil Shillingford, says next week family members wishing to send relief supplies to their family overseas will be able to do so.

“We are going to begin to receive water and food stuff from the general public; people who want to send (supplies) to their relatives and friends in the stricken countries, they can box them properly, label them with large labelling (bold print) and they can deliver it to the DEXIA pack house at the back of AID Bank,” he explained.

It is expected that by next week Monday people can begin to bring in relief supplies and packages for their families.

An account was established at the National Bank of Dominica for anyone wishing to make a financial contribution. The account number is 615000493.