A partnership geared at developing Dominica is how the Hon Prime Minister, Dr Roosevelt Skerrit has described the relationship between Dominica and the Caribbean Development Bank (CDB). 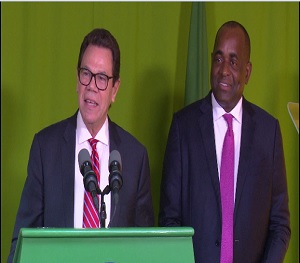 t of the CDB, Dr. William Warren Smith, along with Vice President, Monica La Bennett and Director of Projects, Daniel Best are currently on island discussing the way forward.

The nation’s leader says over the years the CDB has financed several infrastructural projects such as the A1 water system in the Roseau catchment area and the water storage facilities which provide water to tourist ships.

Hon Skerrit revealed that Dominica will continue to build resilience in partnership with the Caribbean Development Bank.

In June, contracts were signed for two major projects, the rehabilitation of the road in Layou and Laudat. These roads were compromised following the passage of Tropical Storm Erika. Financing for these projects was acquired from the CDB.

The construction of a community resource center which will also serve as a model disaster shelter in the community of Layou is among some of the projects to be undertaken shortly.

“It will be on higher ground so that in the event of flooding the residents of Layou will be safe. We should sign this contract hopefully by next week and we should see works in a matter of weeks thereafter,” Hon Skerrit informed.

The nation’s leader described discussions with the CDB officials as productive and anticipates that this will yield positive results for Dominica.

“It is about a partnership, it is about a long-standing relationship and I do not see us leaving the CDB neither do I see the CDB leaving us. We are joint at the hip and there is no way we can part ways. I am very pleased with the presence of the president and the staff and we look forward to an improved administrative relationship,” he remarked.

The Hon Prime Minister also praised the CDB for being one of the first partners to assist Dominica after the passage of Tropical Storm Erika through grant funding and concessionary loans.

President of the CDB, Dr. William Warren Smith, gave his commitment to establishing a stronger relationship with Dominica for the development of both parties.