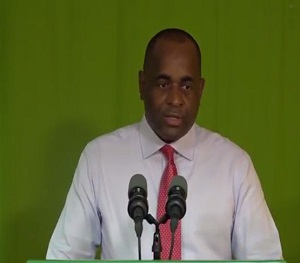 Hurricane Irma has left some of the islands battered by heavy winds and rain with a security issue. In the case of the British Virgin Islands, the state prison was damaged and in other islands a number of people have been displaced leaving properties exposed.

At a press conference, on Monday the Hon Prime Minister, Dr Roosevelt Skerrit briefed the nation on his visit to some of the countries affected, including the BVI and Anguilla.

In addition to cash contributions of over $2 million and the provision of dry goods and water, the Hon Prime Minister informed that Dominica is also deploying human resource in response to the disaster.

“We are deploying police officers to the BVI and Barbuda.  In the BVI, there are several prisoners who have escaped from the prisons- several of them – so that poses a security threat to the island… and in Barbuda, to avoid people coming in and taking advantage of the situation, you need to ensure that there is security “, Hon Skerrit explained.

At least thirty-four people in the region have lost their lives as a result of Hurricane Irma.