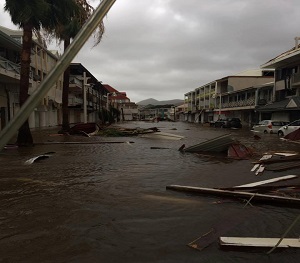 Hurricane Irma has wreaked havoc on a number of islands in the Lesser Antilles during its passage through the island chain on Tuesday and Wednesday this week.

Islands such as Barbuda took a direct hit. The island was struck early Wednesday morning with maximum sustained winds of one 185mph

While prime minister of the twin islands of Antigua and Barbuda praised the twin islands’ preparedness for the passing of the hurricane, he described a helicopter view of Barbuda as heart-wrenching.

“In fact, I believe that on a per capita basis, the extent of the destruction in Barbuda is unprecedented,” Browne admitted in an ABS interview on Wednesday.

Hurricane Irma is reportedly the worst hurricane in history formed in the Atlantic.

There was one fatality reported.  The Prime Minister said flooding on the island poses a threat of water-borne diseases.

He described the island which is home to about 1600 as barely habitable and has made special arrangements to relocate Barbudians to Antigua.

The Prime Minister estimates that at least one $150 million is needed for the initial rebuilding efforts.

A state of emergency was declared on the island on Wednesday.

Both the French and Dutch side of St. Martin also took a pounding from the storm and social media videos which have surfaced reveal total devastation of the world famous Princess Juliana International Airport.

The monster storm flew containers, vehicles, ripped roofs and just about shredded everything in its path leaving extensive damage to homes, business places and public infrastructure.

Reportedly four lives have been lost on the French side of the island.

Both the French and Dutch Government are deploying aid to the island.

The tiny island of St. Barts also took a hit along with the British Virgin Islands of Tortolla and Virgin Gorda. Social media videos surfacing from these islands also show the grim reality of the devastation wrought by the Category 5 hurricane. 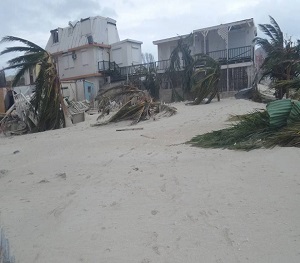 The Us Virgin Islands, St. Croix and St. Thomas were also not spared. St. Kitts and Nevis and Antigua experienced torrential rains and gusty winds.

Hurricane Irma is continuing its path of destruction and up to news time on Thursday was lashing the islands of Dominican Republic, Haiti and Puerto Rico.

Into Thursday night it is predicted that the Irma will get near to the Turks & Caicos and parts of the Bahamas and will get near Cuba by Friday.

It will then most likely head north toward Florida and possibly other parts of the United States.