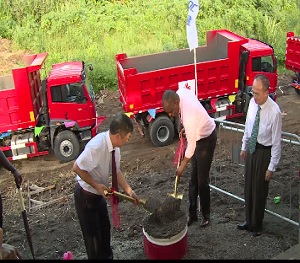 Ground was officially broken for the commencement of the rehabilitation of the E O Leblanc Highway post Tropical Storm Erika on Tuesday.

The President of Dominica, His Excellency Charles Savarin and Mrs Savarin, Prime Minister, Dr Roosevelt Skerrit and his Cabinet as well as the Charge D’affaires of the embassy of the People’s Republic of China were all present to witness the ceremony.

It was the deep and genuine relations which exists between the two countries which was the highlight of Tuesday’s ceremony.

Prime Minister Skerrit expressed deep gratitude for the Chinese Government’s commitment to restore the west coast highway post Tropical Storm Erika and made it clear that this gift was not an obligation.

“Ever since the commencement of diplomatic relations between our countries, the People’s Republic of China has been a true and dear friend of Dominica, a friend that would not have just thrown money at the problem but who would have assessed and concluded that urgent and meaningful help was required and would have committed there and then to fixing the problem no matter the cost or magnitude. Once officials from the government of China had assessed the situation and the commitment was given that China would help, we all as Dominicans went to sleep that evening assured in our minds that this commencement of work would come and even more importantly that the projected completion date of March 2019 would also be realised.  That, ladies and gentlemen is the hallmark of true friendship,” he said.

Hon Skerrit noted that even those who strongly opposed Dominica’s ties with China over the years are now coming around to recognising the significance of the relationship.

“I am inspired by the belated sensitization of some to the folly and inappropriateness of continuously ridiculing a friend who has done repeatedly nothing but good for Dominica.  Indeed, we have observed that not only has the rhetoric subsided but indeed like doubtful Thomas, they asked and were granted the opportunity to thrust their hand in the side of the demonised to make sure that China was and is who it said that it was and is.”

However, he says the greatest act of gratitude which Dominica can offer to China is recognising the One China Policy.

“I look forward to the day when such individuals under the banner of their organisation would gladly and boldly proclaim the One China Policy; for there can be no doubt in any one’s mind at this point in our development where the best interest of Dominica lies. There is but one China and the greatest tribute that we can pay as a nation to this dear friend is to let it be known that strict adherence to the One China Policy is the resolve of all national leaders in Dominica irrespective of partisan, creed or affiliation.”

Interventions on the E O Leblanc Highway will include the restoration of three bridges which were utterly destroyed by Tropical Storm Erika: at Macousherie, Batalie and Pointe Round.  Work will also include thirteen culvert crossings, drainage infrastructure, road resurfacing and the replacement of traffic signs and reflective road studs.

The Hon Minister for Public Works, Senator Miriam Blanchard is leading the project.

“We are witnessing on the Eo Leblanc Highway a continuation of the relentless efforts and commitment of your Government to rehabilitate this beautiful island guided by our ‘build back better’ principle and as I have said publicly on many occasions, this Dominica Labour Party Government is not daunted by the task of rebuilding our beautiful country and I say further that the evidence of this is everywhere including today on the E O Leblanc Highway,” she remarked.

Feasibility studies for the project were completed in January 2016 while preliminary designs were approved in December 2016. on March 1, 2017 a contract was issued to Chinese firm Qingdao Construction Group Limited in the sum of EC$51.3 million and work commenced on March 28th .

Road-users are called upon to exercise due caution during the restoration of the highway and the construction of the new bridges which is expected to last two years.