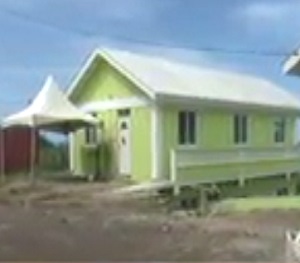 Just under two years after the passing of Tropical Storm Erika which caused several Dominicans to be displaced, six families in the Colihaut constituency have received brand new homes built by the Adventist Development and Relief Agency in partnership with the Government of Dominica.

Government made state lands available in Plat Ma Pierre which was identified as an ideal location to build these new homes.

On Friday, an official ceremony was held at the site to hand over the keys to the six beneficiaries.

The over $750,000 project began immediately after the land was acquired from Government.

Hon Minister for Housing, Reginald Austrie, said the cost of this project did not deter Government from carrying out this task.

He said the happiness and comfort of citizens should not be measured.

“To me, as a politician, the money is not important…what is important is those funds will go towards making six families happy and comfortable.”

Two months ago, Government signed a contract for $720,000 for infrastructural development in that area.  One thousand six hundred and seventy-five feet of road will be constructed to give better access to the new development.

Road works and installation of a water tank is still ongoing to make life better for these citizens.

Hon Minister for Social Services, Family and Gender Affairs and Member of Parliament for Colihaut, Lady Catherine Daniel revealed that Government, in the last financial year spent over six million dollars for displacement allowance and rental of homes for those displaced due to the passage of Tropical Storm Erika.

“I admonish each one of you; you will be coming here as a small community; to work as a family, live in peace, live in harmony with each other, look out for each other…,” she said.

Assistant ADRA Coordinator and Project Manager, Priscilla Prevost, says these homes were built with love by ADRA, and volunteers of the Christian Service International and the Christian Disaster Relief.

Prevost is pleased that ADRA could be part of a project which brings relief to these families.

“Today I can say the houses you see and what the beneficiaries will receive was built with love, unity and commitment.  Our love for God to you the beneficiaries…commitment from start to finish form CDR and CSI and our volunteers who came in from other countries.”

Each unit contains 3 bedrooms; one bathroom; kitchen, dining and living room in an open concept and an L- shaped porch.

One of the recipients, Tabitha Daniel, on behalf of her family and those who received the keys to their brand-new homes, thanked all who made this possible.