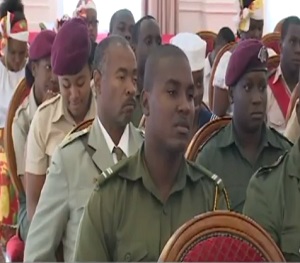 The Dominica Cadet Corps hosted the 30th commandant’s conference of the Caribbean Cadet Association.
A ceremony was held at the State House conference room last Friday to officially welcome the commandants of the various Caribbean countries.
The conference began on Tuesday August 1st and ran through Saturday August 5.
The Cadet Corps, an institution which has been in existence in Dominica for decades, was established to develop qualities of discipline, equity, democracy, civic duty, leadership among the country’s youth.
The Hon Minister for Youth, Justina Charles, says Government will continue to support the corps as the organization continues to instill morals and values in young people.
The Corps is currently assisted with a monthly subvention from Government. Organisations such as the Pierre Charles Foundation, of which Hon Charles is the President, also lends financial support to the corps.
“Our Government is cognizant of the fact there is need for continued training especially for NCOs among other needs.  As such we will do all in our power to uphold the objective of the corps which is to mould and fashion young boys and girls into future leaders of society that others can look up to.”
Featured speaker at the event, Steve Ferrol, who was a member of the corps from 1975 to 1978, praised the corps for playing a major role in his own formation.
“My personal experience together with the observations I can still make from the work and outcome of the cadet movement drove me to one of my favourite and frequently used quotes from St. Paul and I quote, “Do not be conformed [to] this world, be transformed by the renewal of your minds.” This is what you in fact do, Commandants of the region even if you don’t realise and can’t begin to imagine the extent to which you transform lives.”
Colonel Kernel David has bid farewell as Commandant and is succeeded by Colonel Joseph Raymond.