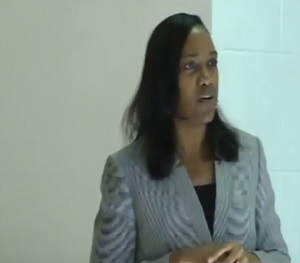 Speaking in support of the 2017/2018 National Budget at Parliament last Monday, Hon Baron informed the House that the Electoral Commission is ready to implement the voter identification card system but is unable to proceed without proper legislation.

Organised protest by the Opposition earlier this year caused the premature conclusion of Parliament before the legislation could be presented to the House.

“The Opposition says that they want electoral reform but really and truly do they want electoral reform? I don’t think so.  They said that they wanted voter identification card; they said that they wanted a clean-up of the electoral register, but when we brought the legislation to Parliament, they brought their protesters outside of Parliament to agitate against it.  Do they want it?  What is their excuse?  That the Government is trying to legalise bribery and treating. They hang their heart on a statement that was made by electoral observers from the Commonwealth that there were multiple instances of treating and bribery including the transportation of electors to the island to vote – That statement is flawed,” Hon Baron remarked.

She informed that local and regional courts have ruled that the facilitation of transportation of voters to vote, in and of itself, does not constitute bribery.

Government has invested $6.1 million for a new ID card system.