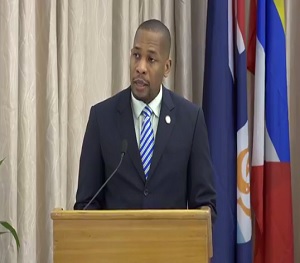 Speaking at the official ceremony to mark the change in chairmanship of the Eastern Caribbean Central Bank Monetary Council on Friday, July 21, Antoine informed that two weeks ago the ECCU celebrated 41 years of exchange rates stability. “That is our currency peg to the US [dollar] $1 to $2.7. Forty-one years is a remarkable fit and a durable testimony to the resilience of our monetary and it is something that we should celebrate,” he asserted.  “Today I confirm that our EC dollar is strong.  As of last Friday July 17th, the backing of our currency was 97.6%.”

He says the financial system has also strengthened with improvements in capital adequacy and profitability. The ECCB recorded a $6.3 million profit for the financial year ending March 2017 after three consecutive years of losses.

At a press conference on Friday, Antoine explained that the losses recorded were because of low interest on its reserves on the US foreign securities market.  A recent rise in rates has boosted the bank’s interest income.

The Governor says the ECCB has also worked internally to lower expenditure.