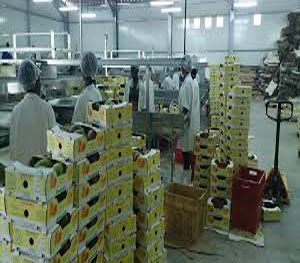 One year following the official opening of two multipurpose pack-houses located in Portsmouth and Roseau, the Dominica Export Import Agency is reporting that the facilities are serving their purposes well.

The multi-purpose pack-house is an initiative funded by the Government of Dominica, the National Authorizing Office of the European Union, and the CARICOM Development Fund and is managed by DEXIA.

In an exclusive interview with GIS News on Thursday July 20th, General Manager of DEXIA, Gregoire Thomas, indicated that there is much more activity at the facilities than was originally anticipated.

DEXIA also makes use of the facility for direct exports in an effort to fulfil demands from the extra-regional market that are not currently being met by hucksters. Further collaboration with WINFRESH has helped the agency to extend into the export of non-banana crops.

However, Thomas says notwithstanding the agency’s effort to stagger production to ensure consistency in the market, there remains a challenge in meeting demands.

He believes that this means there is a huge opportunity for growth in the agriculture sector.

Having already established several markets DEXIA is currently doing assessments and collecting data which will assist the agency to better understand how best to assist farmers meet those demands.