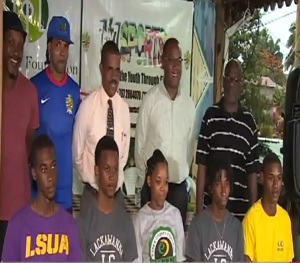 Six student athletes from the Dominica State College have been awarded sports scholarships to pursue tertiary education in the United States.
The partial scholarships were awarded by four United States colleges who scouted the athletes at a Free Kick College Players Showcase in St. Lucia in January this year. The event was arranged through the efforts of the Harlem Sports United Club of Newtown and hosted by the Free Kick Foundation of Georgia operating in St. Lucia.
Government, through the Ministry of Education will also be assisting those students financially. The Hon Minister for Tourism, Sen Robert Tonge, represented the Hon. Minister for Sports, Justina Charles, at a press conference to officially present the scholarships on Wednesday.
“The Government of Dominica is aware of the importance of sports and the positive impact it has on our youth and also the potential for sports tourism. The Hon Prime Minister, Dr. Hon. Roosevelt Skerrit has approved the request by the sports club to provide you with the additional support to make the cost less,” he told the students.
Hon. Tonge admonished the students to make the most of the financial investments being made as he encouraged them to remain focused on their academic and sports pursuits.
“You have received partial scholarships and the rest to be paid by your parents. While there is excitement, parents now have to take the responsibility of topping you up and making sure you are ok so it is [incumbent] on you to continue moving forward doing the right things.”
Hon Tonge further encouraged the students to be ambassadors for their clubs and for Dominica. Five of the scholarship recipients are members of the Harlem United Sports Club in Newtown; Gylles Mitchel, Andrez Joseph, Monel James and Alijah Titre while sixth recipient, Romelcia Phillip, is a member of the Goodwill Runners.
President of the Harlem United Sports Club, Don Leogal, also encouraged the athletes to remain focused both on academic and athletic opportunities that the scholarship will provide.
He says there are ongoing discussions for the continuation of such programmes and asked young athletes to be prepared for the next opportunity