The Bolivarian Republic of Venezuela celebrated its 206th anniversary of independence on Wednesday July 5.  In Dominica, the occasion was marked with a formal ceremony where wreaths were laid at the bust of Simon Bolivar in Goodwill. 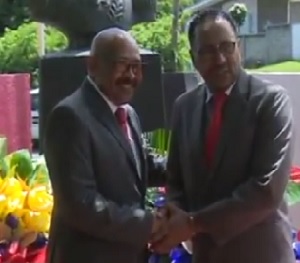 Ambassador of Venezuela to Dominica, His Excellency Hayden Pirela thanked Government of Dominica for its continued support despite the ongoing challenges in Venezuela and avowed Venezuela’s continued assistance to the region.

“In spite of the problems in my country, we will not stop our commitment to the Caribbean.  As you all know, in the present moment, there are serious political confrontations in Venezuela.  For more than 90 days, the opposition has protested, the people have been very violent; more than 80 people have died… although the government has called for peace, the opposition has continued in the street and have not stopped the violence,” he said.

The Ambassador took time to diffuse the rumours of widespread protest ongoing in his country.  Violence which he said, is on many occasions assisted by the international media which manipulate the truth and work to destabilise his country.

“The protest is only one area of the capital,” he explained, “It means that the rest of the country has been normal.”

His Excellency Pirela says the call for peace from both the people and Government of Venezuela continues.

Acting Prime Minister, Hon Dr. Kenneth Darroux, however told His Excellency Pirela and others present at the ceremony that the situation in Venezuela should not dampen the spirit of celebration for the country reaching a great milestone of 206 years of independence.

“I would really like to say that we should take time off today to celebrate and I really don’t think that the nuances … and the needling issues in Venezuela should overshadow this tremendous occasion...,” he said.

Hon Darroux thanked Venezuela for its immeasurable contribution to Dominica in housing, health, culture and education among others.

The Bolivarian Republic of Venezuela achieved independence in 1811.