$263K For Projects In The Mahaut Constituency 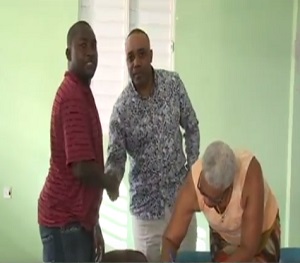 The Hon Parliamentary Representative for the Mahaut Constituency, Rayburn Blackmoore, on Friday June 30, presented a cheque of $263,000 to the Chairperson of the Mahaut Village Council, Lorna John-Charles Daltan for the commencement of several projects in that constituency.

Over the past weeks, the Mahaut Constituency has received an outpouring of financial support from the Dominica Labour Party Government in the areas of infrastructural and small business development.

“Just last week we were in Campbell where we handed over a cheque of $250,000 to help 37 individuals in Campbell with varying business ventures/proposals. We were in Massacre thereafter where we gave support to the Siboulie/Massacre Cultural Group. Before that we were at the Canefield Urban Council office where we signed contracts amounting to $774,000 for road work to be undertaken in Canefield East and RBC Housing Scheme. Before that we were in Canefield again signing a contract for $800,000 for the construction of a river wall at the housing scheme area in Canefield,” Hon Blackmoore recounted.

Chairperson of the Mahaut Village Council, Lorna John-Charles Dalsan, says she is pleased with the financial assistance provided for the commencement of these projects.

She believes these projects will enhance the community.

Four contractors will be engaged on these projects.