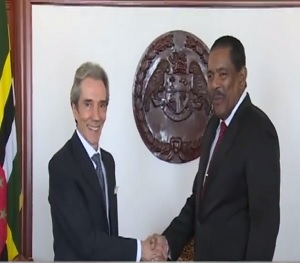 Ambassador Designate of the Argentine Republic His Excellency Luis Beltran Martinez Thomas, presented his credentials to the President, His Excellency Charles Savarin on Wednesday.

His Excellency Savarin thanked the Argentine Republic for their assistance in the areas of health, Tourism, Education, Gender Affairs, Disaster Mitigation, Agriculture and Film Production.

He expressed his hopes for future agreements.

“It is my sincere hope that during Your Excellency’s tenure you will explore and identify additional areas for bilateral and multilateral cooperation as we strive for the further development of our people.”

“I wish to express further hope that discussions will recommence shortly with a view to finalizing a most welcome development that is, the Visa Waiver Agreement which would facilitate travel between Dominica and the Argentine Republic for bona fide nationals of our two countries.”

The Ambassador Designate of the Argentine Republic to the Commonwealth of Dominica confirmed his country’s political commitment to strengthen bilateral ties with Dominica.

His Excellency Savarin assured the ambassador that the Argentine Republic can rely on the Commonwealth of Dominica for support for the candidacy of the Republic on various international bodies in appropriate circumstances.

Dominica and the Republic of Argentine established diplomatic relations in 1985.