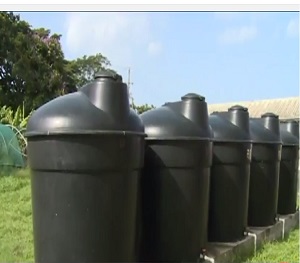 He explained that following the events of Tropical Storm Erika, the club recognised that it could fulfil the need of a back-up water system for a school and so DGS was selected for that project.

Assistant Governor, Haynes Jacob, explained further that “Members of the Rotary Club of Dominica and Rotary Club of Portsmouth were in search of project on which they could collaborate. After much discussion, led mostly by the rotary club of Portsmouth it was decided that backup water systems for all secondary schools is a critical need. We observed that many school days were lost due to a lack of water. So, the planning for the project was started. The intention was and still is that each secondary school would have a backup system which would hold over for 3-5 days.”

However, Jacob explained that the club would undertake the project on a smaller scale in the interim and partnered with the Dominica Relief of Antigua to install a tank that could hold over one day.

“The Dominica relief of Antigua decided that they would like to do a joint project with Rotary and we immediately said yes and pitched the idea of the backup water system for the Dominica Grammar School. So, here we are today 5000 gallons of storage water at a cost of EC $28,000. Not able to hold the school for 3-5 days but at least a hold over for a day. We are delighted as Rotarians to work on this project. The initial layout was done by JB pluming and the all the installation was done by that same firm.”

Principal of the Dominica Grammar School, Alicia Jean Jacques expressed her thanks to the club.

“We are happy that you …have seen the need to provide us with storage tanks in the case of emergency. We really needed that project and we are happy it has come through.”

With a student population 800 and a staff of 74 it is crucial that DGS always has water Jean Jacques explained.