Adeola Xavier Is The Top Student for the 2017 G6NA 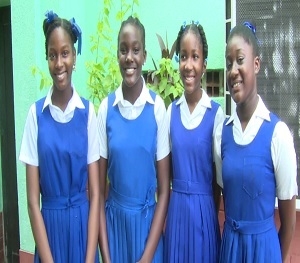 At a Ministry of Education press conference on Monday Acting Education Minister, Lady Catherine Daniel congratulated the students on their achievement.

The twelve -year- old from the community of Coptall credits the drive of her parents for what she has accomplished.

“Since I was small, they were prepping me for the exam and they’ve always been telling me that I would do well and I was believing but I didn’t think it would reach that far. So, I’d just like to thank my parents and my teachers from Grade K to Grade 6 for all the prep they have done for me.:

Xavier who plans to attend the Convent High School advises fellow students to trust God and their parents in their studies.

“I feel really ecstatic and elated. It was a bit of a struggle but in the end it came out worthwhile.

Kerelle Joseph, who came fourth, stated that preparation was difficult but worth it.

“My parents were involved a lot and so were my teachers. They were really pushing me.”

Carlisa George expressed how relieved she was to gain the fifth spot surpassing her sister who placed sixth last year.

“A lot of sleepless nights and it was hard because of where I lived and honestly I just broke down a lot….it was tiring so I’m very happy. I plan to attend the Portsmouth Secondary School because not only is it very sports orientated but academics also. I love sports so I want to get more into sports.”

Deleon Fontaine who came second on the list has beat the odds being the only boy in the first top five of this year’s examination.