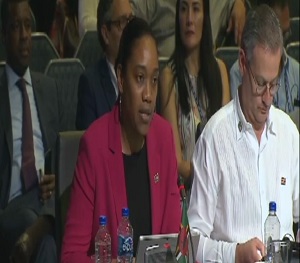 The Hon. Minister for Foreign and CARICOM Affairs, Sen Francine Baron, has called on developed nations to take responsibility for their part in global warming which has tremendous effects on Small Island Developing States (SIDS) like Dominica.

The Hon minister recognized the need for the Organisation of American States to take action to support the goals of member states in relation to climate change.

Speaking at the first plenary session of the General Assembly of the OAS on June 20, she outlined that the effects of climate change on SIDS cannot be dealt with without the OAS first addressing the cause.

“It is without question that the rule of law and the democratic norms and values are critical to the peace and prosperity of our people. Peace and prosperity however cannot be achieved if our island states continue to be affected by the impact of climate change. The impact of more severe hurricanes and the destruction of our most valued tourism assets, our beaches and coral reefs, and the damage to our infrastructure threaten to reverse the developmental gains that we have made. Our efforts to attain the 2030 Sustainable Development Goals of the United Nations cannot be achieved without dealing with the causes of climate change.”

It has been noted that SIDS, particularly Caribbean islands, are significantly affected by drastic changes in weather conditions. This, believed to be proven by the worsening of storms and hurricanes recently affecting those islands.

“The withdrawal of the second largest emitter of the greenhouse gases from the Paris climate accord is a major concern to small states. Climate change in fact poses an existential threat to at least 13 of the 34 member states of this organization and many others. We therefore, use this forum to urge the united states of America to reconsider its decision to withdraw from the Paris Climate accord.”

Hon. Baron reconfirmed Dominica’s commitment to realizing the 2030 sustainable development goals of the OAS and upholding the established laws.

“Dominica is committed to upholding the rule of law and to strengthening of our democratic institutions as outlined in the InterAmerican Democratic Charter.”

This was the 47th general assembly of the OAS which ended on Wednesday June 21st.