The Honourable Member of Parliament for the Salybia Constituency, Cassius Darroux, has announced that in September a Kalinago Farmers Group will be launched.

Hon Darroux explained that the group will be responsible for overseeing 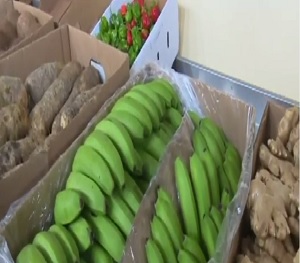 all agricultural activities in the Kalinago Territory, Atkinson and Antrizle.

“Really what we want to do is to create a functional body, because too many times we have individuals who are trying to lobby on their own. What we are trying to do is to put things in order so that when a group is asking for assistance, we help not just one individual but on a group basis and everybody can benefit and see the outcome of what we are doing.”

The MP was addressing Sineku residents at a townhall meeting on Wednesday June 21 when he made these comments.

Continuing to speak to the farmers, Hon. Darroux also expressed concern that there is an increase in non-communicable diseases in his constituency which he says could be as a result of less people growing and eating their own food.

He has been working with his constituents in that regard and vegetable seedlings in the amount of $5000 have been distributed to encourage backyard gardening.

“I firmly believe that with the [reintroduction] of backyard gardening we can start to lessen the presence of such diseases.”

Hon Darroux also used the opportunity to encourage farmers to produce crops that are in high demand for the export market. He noted that currently Dominica is exporting Dasheen to international markets.

The MP apprised his constituents of a few other crops which are high in demand.  These include “turmeric, ginger, papaya, sweet potatoes, cassava and even toloma.’’

Government continues to invest heavily in the farmers of the Salybia constituency. Within the past year and a half, farmers within that constituency have received approximately 750 bags of fertilizer.

Additionally, three agricultural extension officers are currently engaged under the National Employment Programme to meet the needs of farmers in that part of the island.