Over $700k for Road Works in Canefield RBC and Canefield East

On Wednesday, June 14th, five contractors signed for projects to rehabilitate roads in Canefield East and Canefield RBC to the sum of $774k.

At the signing ceremony at the Canefield Community Centre, Honourable Member of Parliament for the Mahaut Constituency, Rayburn Blackmoore, stated that the projects would be implemented through the Canefield Urban Council.

“I’m hoping that work can start tomorrow. What is happening here today, could not have been possible without the tremendous support from the Prime Minister who is also the Minister for Finance. I want to also say good afternoon to my colleague minister Honourable Justina 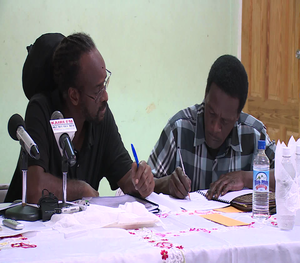 Charles, who is also the Minister for Constituency Empowerment for facilitating today’s event… This government, which is being led by a visionary leader, have decided to rehabilitate all our community roads in the country and to ensure that we create the environment for expansion and for economic advancement.”

At Canefield East, Shane Alexander was contracted to construct 300 metres of rigid pavement at a cost of over $200k.

Another 160 metres of rigid pavement in Canefield East will be constructed by Stalyn Anthony at $120k.

Richard Alexander has been contracted to construct 85 metres of rigid pavement at Canefield East at a cost of over $66k.

Chairman of the Canefield Urban Council, Maximea Powell, addressed the Honourable Parliamentary Representative on behalf of the council.

“I would like to use this medium to express to the Parliamentary Representative Honourable Rayburn Blackmoore and the Government of Dominica for taking the initiative to undertake such an important project within the municipality of Canefield. The council is pleased to be associated with this project as it will improve the infrastructure of the community. We see this signing ceremony and the works that will be undertaken as timely and we also hope that the residents will be satisfied after completion of works on this project.”

Meanwhile honourable Blackmoore stated the funds for road rehabilitation at River Estate has been approved and will begin soon.

He also stated that in the new financial year 2017/2018 roads in upper Roger Canefield would be rehabilitated.

Between 2013 and 2016 over $420k has been made available to the Canefield Urban Council for work in the community.

Honourable Blackmoore pledged to continue working with the Canefield Urban Council for the development of the community.