Seven contractors from the Soufriere Constituency have been awarded contracts by the Government of Dominica to reconstruct roads in Soufriere and Scottshead. 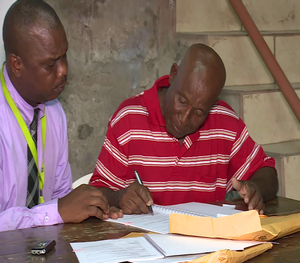 At a signing ceremony on Tuesday, June 13th, at the Soufriere Village Council office, Honourable Parliamentary Representative for the Soufriere Constituency, Denise Charles revealed that the projects will be completed at the total cost of over $500k.

In Scottshead Government will reconstruct five roads; four at Savanne Heights and one in Grand Ravine.

“In Scottshead we’re going to spend over $238k and the contractors in Scottshead are Tony Bernard, George Johnson, Heskeith Mitchel and Byron Hunt will construct the roads for us in Scottshead. I am happy that because of the vision of this government, when we reconstruct roads that we empower local contractors. That means in each village, contractors were selected from the respective villages and that says volume for our government.”

Chairman of the Soufriere/Scottshead Village Council, Heston Charles, expressed his gratitude to government.

“As a community on a whole I want to say thanks to the Government. Ms Charles let me say to you, if I were to sum this up in one phrase, I would say, ‘movements for improvements’…”

Meanwhile, the Honourable Parliamentary Representative noted that other roads will be soon addressed.

We have one more road to do in Savanne Heights, one major road and we’ll be addressing that soon. I just want to tell the bus drivers who may be listening today, I am aware of the potholes on the road from Pointe Michel to Soufriere and that should be addressed this week.”