DLP Government at the Forefront of Sports Development

The Hon Prime Minister, Dr. Roosevelt Skerrit has lauded his Government for being at the forefront of sports development in Dominica.

He says his administration has been working to provide training and infrastructural development for sports on the island. 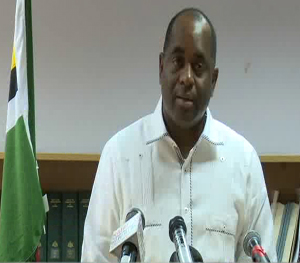 “Also, the facilitation of public servants to represent our country. When we came into office that was a difficult thing for people to do…the system did not allow you to do that. There were many people who were on the national team that were denied time to play for their teams. We have been able to break down these walls, and allow it to become part of the system, that once you are on a national team that you would be given the time off without any consequences.”

The Dominica leader says under his administration more has also been done for sports in terms of bringing regional and international games to the island.

“It is under this administration, that in the first term of our country’s history we have been able to host international matches. Not only for cricket, but for football. We had the Canadian National Team flying directly from Canada into Douglas-Charles Airport to play at the Windsor Park. It is we who transformed the Benjamin’s Park from a swamp to a facility that is hosting regional games.”

Hon. Skerrit stated that Government has plans to continue improving sporting facilities on the island.

The Hon Prime Minister further informed that Government has also secured land in Warner to build a synthetic track for athletes.

The nation’s leader made these comments at a contract signing for the design of the national multi-sports complex on Friday, June 9th.